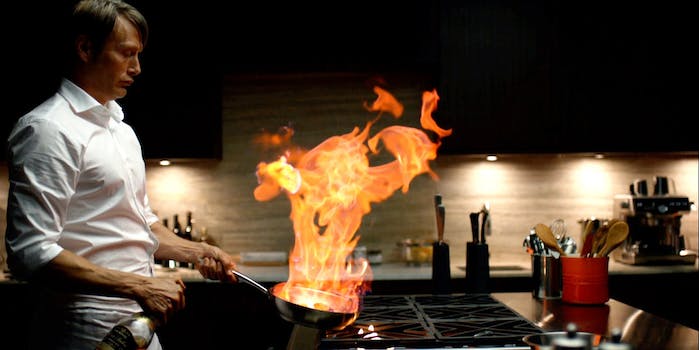 Or, "Everything you ever wanted to know about your favorite cannibalistic serial killer but were afraid to ask."

When NBC’s Hannibal first aired last year, no one was really expecting it to a) inspire a super-intense and creatively active fandom or b) end up with some of the best social media outreach in the business.

Luckily, showrunner Bryan Fuller loves his fans and, more importantly, he seems to understand what they want. Meaning that the show’s second season was ushered in by having the decidedly un-social-media-savvy Mads Mikkelsen answer fan questions on Tumblr and Twitter.

Mads Mikkelsen is 48 years old, so it was kind of like watching your friend’s dad browse the Internet. Except he’s your friend’s cute dad who you maybe had a crush on for a while. Whatever.

I’m told we’re trending around the world, but I don’t know what that means. #GoneMads

The good news is that there’s basically zero chance of him properly breaking the fourth wall and reading your fanfiction, because he apparently had to have someone point directly at the screen while showing him how to use Tumblr. His greeting to fans was, by the way, “Hi Tumblers, we love that you are there.” A solid effort, Mads. 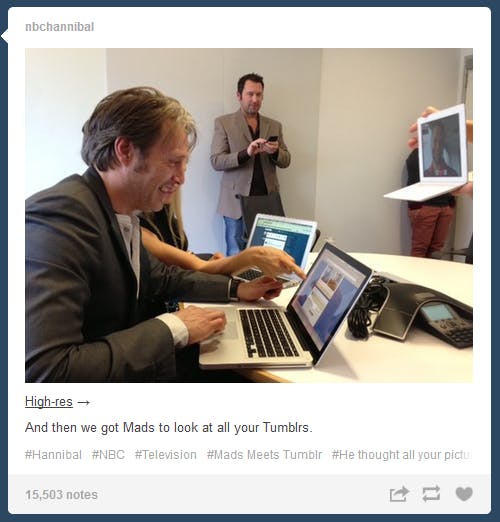 As for the Q&A, Mikkelsen gave us some insight into what it’s like on the Hannibal set—e.g. sometimes one of the people playing a corpse falls asleep and starts to snore.

.@ohheyitskerri Someone kept snoring when filming the body mural in S2 and because so many bodies were there we didn’t know who. #GoneMads

.@kim_lizanne A foie gras – Laurence and I deliberately f’d up the scene to eat it again. #GoneMads

.@MyAnTran Not at all. This is Hannibal’s dream. Not his nightmare. #GoneMads

Bearing in mind that this guy won the Best Actor award at Cannes two years ago and is playing one of the creepiest characters on television, he seems to have a great attitude toward his cheerfully dorky fanbase. Of course, it probably helps that Mads Mikkelsen’s idea of Hannibal Lecter is, rather than a dark and tormented serial killer, essentially a cheerful dork himself. After all, as he points out, the blood-soaked events of Hannibal aren’t Hannibal’s nightmare; they are his dream.