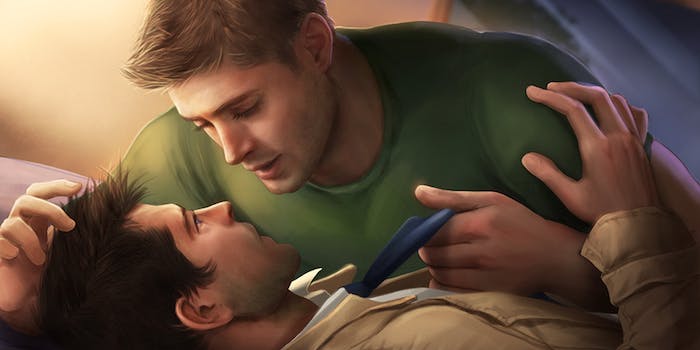 Was actor Jensen Ackles suddenly stricken with homophobia? Well, this is fandom, and it's a lot more complicated than that.

“BEING GAY IS NOT OKAY. THANK YOU JENSEN ACKLES FOR BANNING GAY QUESTIONS AT CONVENTIONS,” a Supernatural fan wrote on Tumblr in the middle of a fandom-wide meltdown that took place this weekend over Supernatural New JerseyCon.

On Saturday morning, multiple fan reports surfaced alleging that a con organizer had refused certain ship-related questions because Jensen Ackles, who plays the dreamy Dean on the CW’s long-running testosterone candy, was “uncomfortable” when faced with the show’s enormous contingent of Dean/Castiel shippers. The problem? Dean is a guy, and Castiel is a male angel. Questions about the show’s notable homoerotic subtext were first disallowed, then booed by audiences—and notably rebuffed by Ackles, a lead actor on the show.

Was Ackles suddenly stricken with homophobia? Well, this is fandom, and it’s a lot more complicated than that. The shippers are part of the enormous slash fandom that has long fueled Supernatural‘s popularity, pushed it to eight seasons with no end in sight, and made it part of the trifecta of Tumblr fandoms to rule them all: Superwholock. Supernatural (SPN) has had intense shippers for as long as it’s been on air. But none of them can hold a candle to Destiel, the huge Dean/Castiel ship that has swallowed fandom whole ever since Castiel strode into the show’s fourth season and raised Dean from perdition and into the annals of slash fandom’s megaships.

But after eight seasons, the actors’ discomfort with the subject of Destiel seems to be increasing along with the subtextual support for the ship on the show itself. Addressing the ship directly would potentially result in either a denial or an affirmation, either of which would spoil the plot or upset shippers. So while questions about Destiel have long been a part of the actors’ environments at conventions, as time goes on it’s getting harder to answer.

The question “Is Castiel in love with Dean?” did make it into a Saturday panel because the always fandom-friendly Misha Collins, who plays the angel, doesn’t mind handling potentially awkward questions that may only cause pain to shippers. But a question about Dean’s sexuality supposedly never made it past a con organizer because those questions made Ackles “uncomfortable.” The fan who asked both questions identified herself as “Jen,” an 18-year-old. While fandom rejoiced at Misha’s straightforward answer, it proceeded to implode over the thought that Jensen might be putting a moratorium on talk of shipping—especially male/male shipping. Some fans went even further:

As the crowd booed the questioner who started to ask about homoerotic subtext, Ackles commented on the fact that it was the very first question of the evening, then told her not to ruin it for everyone, and brushed off the question—which never got fully asked—by saying he was “going to pretend not to know” what she was about to ask.

If SPN fans thought they had it bad on Saturday over the unasked question, the drama on Sunday over the one that went through was overwhelming. After Jensen dismissed the fan, she was supposedly found crying. It was exactly the worst-case scenario for a fandom already tremendously polarized around the subject of Destiel. And it came at a moment when fans were already divided intensely over whether asking questions about the show’s rampant gay subtext—this season so far has found the two would-be lovers embracing and telling each other “I need you” at crucial plot moments—would be invasive, or a perfectly understandable response to the show’s own pandering to its slash fans.

As fans lashed out in anger at Jensen, the questioners, and each other, the #NJCon hashtag briefly trended worldwide.

Still, not everything was negative.

But the general good vibes at the convention were completely overwhelmed by the emotions Ackles’s dismissal stirred up from fans on Tumblr, LiveJournal, Twitter, and beyond.

The creators and the actors of Supernatural are used to these questions. From the beginning the show has had its share of Wincest shippers, fans of the incesty brotherly love of Dean and Sam; more than a few conventions have also seen an intensely devout subset of Jared/Jensen RPF tinhatters, fans of the real-life relationship of Jared Padelecki and Jensen Ackles, who play the brothers on the show. The fan devotion to and enthusiasm for these ships have made Supernatural conventions occasionally uncomfortable places for both actors and fellow fans in the past.

But Destiel is not an entirely fan-created ship. And Supernatural, known for killing off its textually gay characters, is often derided for “queerbaiting”—dabbling in “Ho Yay” only to turn around and declare “No homo.” Ackles himself is not immune, and Destiel fans have had plenty of moments like this from DVD commentaries, panels, and extras to encourage their shipping:

The wink-wink-nod attitude of the show towards its many slash fans is not only frustrating to fans, but problematic, considering the incredibly long line of shows that utilize queerbaiting in order to build their fanbases, without any intention of ever following through. The lack of acknowledgment that queer romance could be a possibility for prime time’s most compelling relationships is a core part of the reason slash fandom exists to begin with; and while fandom has grown decidedly more mainstream since the days of Kirk/Spock, the attitude creators have towards the idea of two male characters falling in love on a show that’s already established them as straight has undergone virtually no change at all.  It’s why, at a core level, so many slash fans still desperately hope and believe that their ship could become canon—most notably, Sterek fans and Destiel fans. Both Teen Wolf and SPN fans can be found frequently talking about their ships as if they are “endgame”—holding out hope that the show’s creative team will do the diverse thing and allow their presumably straight characters to be queer and in love.

But as far as Supernatural goes, it seems unlikely. In addition to the show’s abysmal track record when it comes to women, the show has also never shown much respect for the enormous female population of shippers who comprise the majority of its fanbase. On episodes where SPN parodies its own fanbase, it portrays it entirely inaccurately as being mostly comprised of male geeks with a few outlying, rabid, and crazy female slash fans in the minority. The show’s own attitude of contempt towards the many slash fans in its midst catalyzes the need for slash shippers to have some acknowledgment of the Destiel pairing from the actors and creative team—and encourages the other parts of the fandom to be dismissive and contemptuous of it in their turn.

Many people are wary of slash shipping, claiming that slashers can exhibit a fetishistic attitude that refuses to acknowledge or celebrate platonic male intimacy or push for more honest queer representation. But at a basic level, Ackles’s dismissal of the question of Dean’s sexuality—from a girl who claimed to be bisexual, no less—smacked of erasure. Many, many fans from around the fandom declared themselves angry, hurt, and marginalized. Others vilified the behavior of the fans who refused to respect Ackles’s boundaries and pushed the awkward questions upon him to begin with. Tumblr user heartensoul, who uploaded the video of the incident, was struck by the crowd’s behavior as much as by Jensen’s:

When I heard the crowd collectively booing … I got really uncomfortable with my own response and also theirs. When I heard Jensen’s response, I was stunned into silence and didn’t record, take pics, or really even hear the questions for a bit.

What happened was not okay. Jensen needs a better response. Fandom needs a better response. We need to safeguard against this, either through screening questions or the actor being a bit more adult about it and owning up by saying “that’s not how I intended to play it, but you’re welcome to your interpretation.” These types of questions are not going away; we need to learn how to interact with them like adults. All of us.

As fandom grows more and more mainstream—Tumblr and slash shipping are almost synonymous at this point—it’s not just SPN’s creative team but any number of shows who need to consider the question of how to deal with questions from slash fans at conventions like this.

Especially if, in the case of Supernatural, the show is only getting slashier over time.

Update: Tumblr user themysterygirlfromnjcon has come forward claiming to be the fan who asked the question, apparently creating a Tumblr account to explain what her full question would have been:

I’ve loved seeing Dean’s character become more comfortable with himself this season. As a bisexual, I’ve noticed some possible subtext, as seen in Everybody Hates Hitler, that Dean might be coming to accept himself as something other than straight too? I know you’ve said you know Dean better than anyone, so, in your professional opinion, as the preeminent scholar on Dean Winchester, if you see that as a valid interpretation of what’s going on with the character this season.

Another Tumblr user, wonderfulwincestxx, also claims to have left the convention early after having a question related to the It Gets Better project rejected before she could ask it.