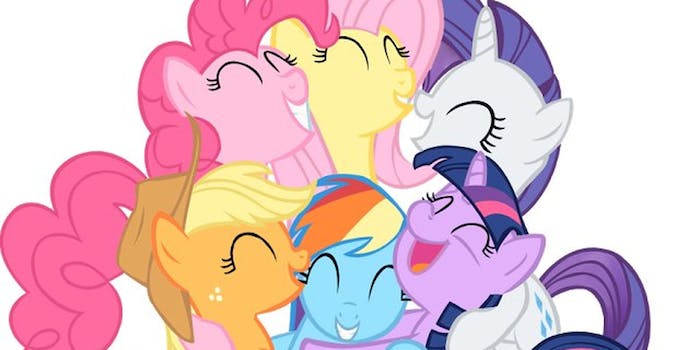 Bronies officially have their own nonprofit

The Brony Thank You Fund, started on Indiegogo, is now a legitimate nonprofit organization.

It started out as a groundbreaking moment in any fandom: a group of fans coming together to produce a commercial promoting their fanbase. But when the “brony commercial” aired, fans of My Little Pony: Friendship is Magic did more than just pat themselves on the back: They created the Brony Thank You Project and donated portions of the Indiegogo-funded campaign to Toys for Tots and other charities.

Now the Brony Thank You Project has gone fully legit. After months of planning, the organization has finally achieved 501(c)(3) status, qualifying it as a full not-for-profit.

“After almost a year to the day after the original incorporation of The Brony Thank You Fund as a New Hampshire non-profit corporation,” the group’s website announced on May 10, “the Internal Revenue Service today recognized us as a tax-exempt public charity, putting us in the same ranks as the American Red Cross, Toys for Tots, and Save the Children, just to name a few.”

The organization’s stated purpose is to fundraise for various charities. “The Brony Thank You Fund exists to promote and collect donations to worthy charitable organizations, especially those centered around children.”

The Brony Thank You Fund erroneously stated that it was “the only media-related fandom ever to create their own full-fledged tax-exempt charity!” This is far from being true; in addition to homegrown charity fan drives and larger organized movements like Help for Haiti, fandom contains a few not-for-profit fandom heavy hitters like the Harry Potter Alliance and the Foundation to Decrease World Suck. There are also other not-for-profit fandom organizations like the Organization for Transformative Works.

But it is true that few fandom organizations have commanded this much media attention. The larger cultural fascination with bronies has been put to good use, as Bronies like Thank You Fund founder James Turner. Turner told the Daily Dot last year that the whole project was about more than just making bronies look good.

As the little girls watching the show now get older, their friends might tell them, ‘No, you should be listening to Justin Bieber, ponies are for kids.’ I want them to think back on that Navy officer or the biologist sitting in the lab and say, ‘No, I don’t have to give this up as part of growing up.’

It’s been a rough year for bronies, with numerous developments on the show and IRL finding their way into plenty of online drama. Earlier this year one brony convention fell completely apart after organizers literally took the money and ran. And right now the bronies are trying to trend #thankyouDHX on Twitter as a way of cutting down on backlash over the Pony franchise’s latest project, Equestria Girls. The Thank You Fund was quick to point out that saying thanks was how it all got started.

Our whole purpose in starting the Fund was to #thankyoudhx (and others), but we’ll say it again because it’s worth repeating.

The Thank You Fund’s next big project seems to be celebrating its own inaugural NFP status. A long-planned brony scholarship to California animation school Cal Arts seems to be langushing, but with renewed interest in the fund and a sustained non-profit plan, the Derpy Hooves Scholarship might meet its goal yet.

At the very least, the non-profit will help supply evidence that, despite the neigh-sayers, the brony fandom isn’t about to fade away any time soon.