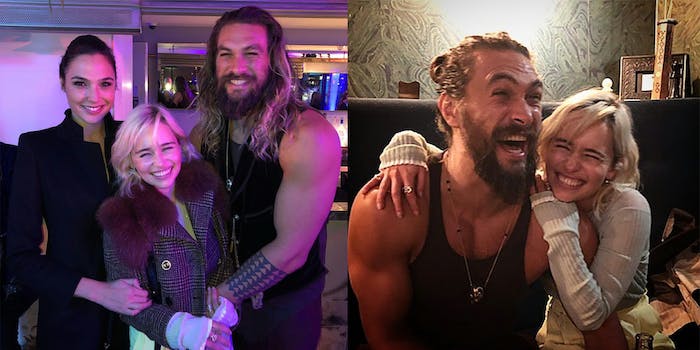 The Mother of Dragons, daughter of Zeus, and the King of the Seven Seas walked into a bar.

It has been more than six years since we last saw Khal Drogo take command on Game of Thrones, but co-stars Jason Momoa and Emilia Clarke’s latest reunion makes it seem like it was just yesterday—and this time they’ve got a third companion.

Although they’ve hung out together multiple times since Momoa finished on Game of Thrones, this reunion comes at a big time for both of them. Clarke, who’s sporting blonde hair for Daenerys Targaryen, is filming Game of Thrones’ eighth and final season while Momoa is in the midst of a global press tour for Justice League. On Sunday, the two met in London for some drinks, and their joy is infectious.

Clarke posted the first photo of them to Instagram, calling Momoa her “sun and stars” (as Daenerys did to Drogo), proving it doesn’t take the sun rising in the west and setting in the east for these two to reunite.

Momoa shared a different photo on Sunday, where he lamented the fact that they weren’t able to see each other more often.

Crazy mad insane LOVE for this queen it’s truly like bubbles of giggles are in our bellies when we are together. It’s a shame we don’t get to see each other as much as we would like but when we do i feel like a fucking KHAL love u @emilia_clarke always forever Yer Jalan Atthirari Anni #getreadyhereicome #GOTohana #slaps mahalo @bullchinashope1_ for always taking care of me @cristian.bullinachinashop you make it a home away from home brother. Aloha Drogo

However, their reunion would become even more super after they were joined by Momoa’s Justice League co-star Gal Gadot, who plays Wonder Woman in the DC films. And for Momoa, it was a pure fanboy moment.

“I’m so honored to know these two amazing women queens goddesses @gal_gadot@emilia_clarke Wonder Woman aka amazing mother warrior aka saves my ass all the time in JL And Khalessi aka mother of Fucking dragons aka my boo aka moon of my life,” he wrote.

Aquaman and Wonder Woman may be uniting in their own movie, but as far as Game of Thrones is concerned they’re definitely Team Dany.