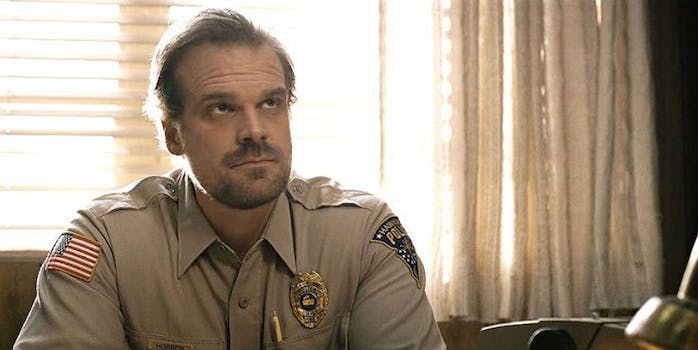 It's an appropriate number of retweets this time around.

David Harbour seems like an all-around really solid dude. After Stranger Things made him a household name in 2016, the hardened actor clearly hasn’t let fame go to his head.

When earlier this year, a fan reached out on Twitter asking “what it would take” to officiate her wedding, Harbour reasonably came back with the stipulations of 125,000 retweets (providing the date worked with the shooting schedule of Stranger Things season 3) and that he would get to read a love letter of his choosing and eat the first piece of cake.

A man of his word, Harbour traveled to Springfield, Illinois, last month in full Chief Hopper costume to ordain the wedding.

Hey internet. I know it’s been awhile. I retreated. Needed some space. You probably get it. But I’ve been thinking about ya in the interim. And all your retweets. And so me and some fun folks in Springfield, Illinois made good on our promise we made all those months ago. pic.twitter.com/fZK8zNMQSi

When the stipulation to the first challenge was met in less than 24 hours, Harbour—who stars in the upcoming 2019 Hellboy reboot—said that he planned to make it “seriously hard” next time.

Well, that time has now come. A couple weeks ago, film journalist Spencer Perry reached out to Harbour on Twitter after having met him on the set of Hellboy and asked if he would officiate his upcoming wedding in March as the titular character.

Never one to shy away from a challenge, Harbour finally responded on Saturday.

“666k. Of this tweet. Big Red officiates. Full Gear. In his saintly best,” he wrote. “Impossible number? Think of how difficult it will be for me to get this character ordained by a Christian church.”

He also added that he would knock off 500,000 if Perry could get Hellboy creator Mike Mignola to agree to read a poem at the service.

666k
Of this tweet.
Big Red officiates. Full Gear. In his saintly best.
Impossible number?
Think of how difficult it will be for me to get this character ordained by a Christian church😈🙄
(P.S. – I’ll knock off 500k if you can get @artofmmignola to read a poem at the service) https://t.co/cnzHrcnsOo

At the time of this writing, Harbour’s tweet has been retweeted nearly 14,000 times. However, Mignola has made it clear that he’s on board:

In other words, it looks like there’s a decent chance Harbour is going to have to clear his calendar in March 2019. Best of luck to the happy couple.