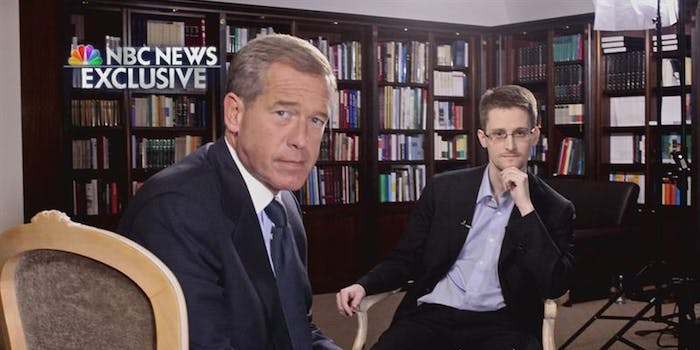 Get ready for someting "rare and revealing."

Edward Snowden has granted his first ever American television interview to NBC Nightly News anchor Brian Williams. Filmed in Moscow, the interview will air in an hour-long special on May 28 at 10pm EST.

Williams also interviewed Glenn Greenwald, along side Snowden, about their work together and the subsequent debate it’s ignited.

Snowden has consciously avoided American television since he revealed himself as the NSA whistleblower last year, though he’s granted interviews to Greenwald himself as well as appeared at events like South by Southwest on behalf of the ACLU.

The timing coincides with Greenwald’s heavy press tour for his book, No Place to Hide, that hit stores earlier this month.

NBC News, which calls the interview “rare and revealing,” reportedly approached Snowden through several avenues, the Washington Post reports. Additionally, NBC has entered into a “collaboration agreement” with First Look Media, the company that is now publishing Greenwald’s work on its website The Intercept.

Greenwald says the agreement “simply provides that we will work together on selected NSA stories, on a story-by-story basis, when it will help the reporting to do so,” according to the Post.