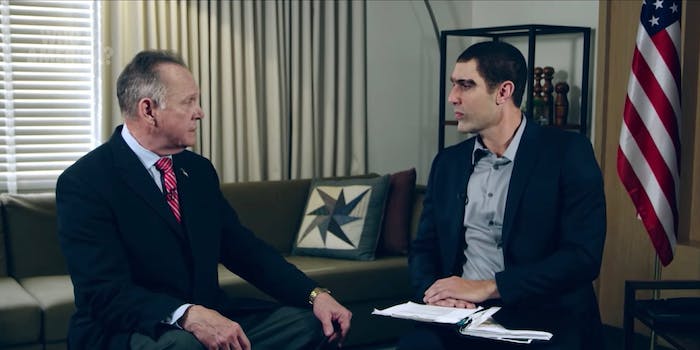 The alleged pedophile is seeking $95 million in damages.

The episode in question, which aired on July 29, featured Cohen—in-character as Erran Morad, an Israeli anti-terrorism expert—speaking with Moore in Washington, D.C. The meeting involved a demonstration of Israeli technology, which included a wand that, according to Morad, could detect sex offenders. Whenever Morad waved the wand over Moore, who has faced several sexual misconduct allegations that span decades and that resurfaced during his Senate campaign, it would start beeping. (Moore denies the allegations and is also suing four of his accusers for defamation and conspiracy.)

Moore had already spoken out against the segment before it aired. He explained that he was brought to Washington, D.C. so that he could receive an award for his support of Israel when he met with Cohen. An attempt to stop Showtime from airing the segment didn’t work. Now Moore is also seeking $95 million in damages, pointing to how he met with Cohen under false pretenses; according to Moore, if he had known that Morad was Cohen, he would’ve never agreed to meet with him.

Cohen previously faced lawsuits after the release of his film Borat. Two college students argued that they were tricked into appearing in the film in 2006, but a judge tossed out the case.

“The press has been sent copies of an alleged complaint, yet to our knowledge Showtime has not been served,” Showtime told the Hollywood Reporter in a statement. “With that said, we do not comment on pending litigation.”

You can view the lawsuit in its entirety here.