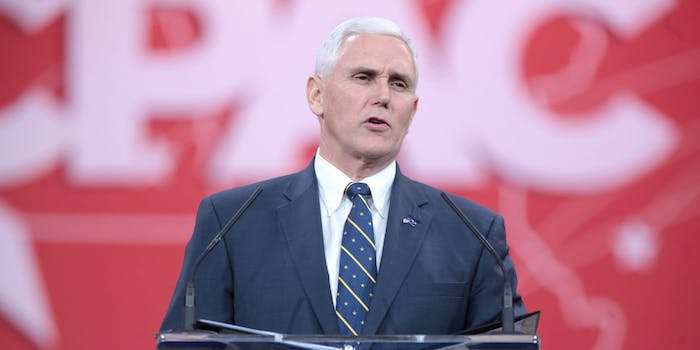 Students at the University of Notre Dame are planning to walk out of Vice President Mike Pence’s commencement speech on Sunday.

Pence is scheduled to deliver the address on Sunday at the prominent Catholic university. Typically, the university invites newly inaugurated presidents to deliver a commencement speech.

However, thousands of students and faculty members signed a petition asking Notre Dame president Rev. John Jenkins not to invite President Trump, according to the Washington Post.

“We also will walk out in dignity and solidarity with all marginalized people affected by Pence’s politics, both on this campus and throughout our nation,” said We StaND For, a human rights advocacy group made up of students from colleges in the area, in a Facebook post.

We invite all Notre Dame students to help take back our commencement this coming Sunday! #WalkoutND pic.twitter.com/ifOt5RB4hO

The group they are opposed to Pence’s beliefs and actions exhibited during his time as governor in Indiana. We StaND For said Pence’s stance on the LGBTQ community, undocumented immigrants, and sanctuary cities factored into their decision to walk out from his speech.

“The participation and degree-conferring of VP Pence stand as an endorsement of policies and actions which directly contradict Catholic social teachings and values and target vulnerable members of the University’s community,” Xitlaly Estrada, a Notre Dame undergraduate, said in a release from We StaND For.

According to a Facebook event for the walkout, students are encouraged to stand up as soon as Pence begins talking, walk away from him “quietly but deliberately” toward the nearest exit, and join a group outside where they will have a “celebration and tassel turn.”

Paul Browne, vice president for public affairs and communications at the university, told the Post that the school will not try to stop the walkout.

Browne told the Indy Star that school officials will only intervene if the protest “seriously disrupted” Pence’s speech or put safety at risk.

Discussion on the group’s Facebook event has been mixed between some in support of the walkout—including people claiming to be alumni of the school—and others accusing them of being “children that’ll never grow up.”