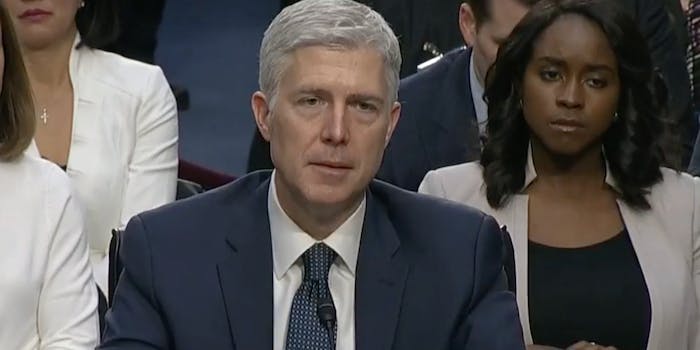 He says the student didn’t remember his question properly.

Recent allegations of sexism against Neil Gorsuch may not hold any ground.

On Monday, a former student of Gorsuch claimed that, in the form of a question, Gorsuch implied women regularly abuse the maternity leave system by temporarily taking jobs only for company benefits. In his Supreme Court nomination hearing Tuesday, Gorsuch clarified what he asked and suggested the student didn’t properly remember his question.

Gorsuch said he did ask for a show of hands, but worded the question very differently than his former student recalled. In the hearing, Gorsuch told Sen. Dick Durbin (D-Ill.) that his mother had to wait a year to take the bar exam because of her gender.

“The problem is this: Suppose an older partner, woman at the firm that you’re interviewing at, asks you if you intend to become pregnant soon,” Gorsuch said. “Your choice as a young person [is] you can say yes, tell the truth…. And not get the job and not be able to pay your debts. You can lie, maybe get the job…That’s a choice, too, that’s a hard choice.”

Gorsuch said his intentions were to show how often women are asked inappropriate questions about their family planning during job interviews and asked students to raise their hands if they had similar experiences.

“I am shocked every year, senator, how many young women raise their hand,” Gorsuch said to Durbin. “It’s disturbing to me.”

After reporting the claiming, NPR followed up with interviews with former students of Gorsuch, who dismissed the allegation and offered their support of Gorsuch. Additionally, it was revealed that Jennifer Sisk, who made the claim in a letter to the Senate, previously was employed by a Democratic senator.