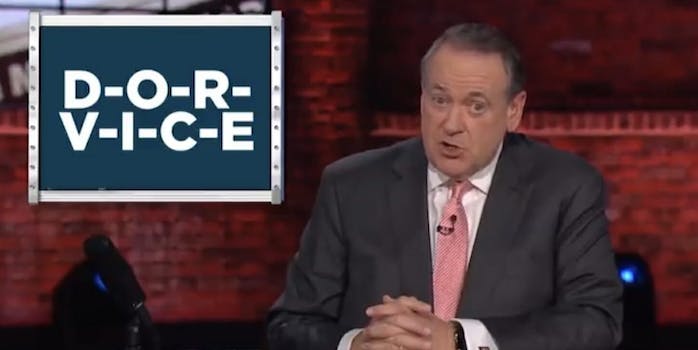 ‘Huckabee’ is a wolf in sheep’s clothing, lurking on your TV

Huckabee's talk show is not good.

Everyone is their own favorite comedian. My mom said that to me once when I was a teenager. I kept this thought in mind as I dug through clips of former Gov. Mike Huckabee’s (R-Ark.) YouTube comedy show. Yes, you read that correctly. The man who hasn’t held an elected office since 2007 and spends his time stumping for President Donald Trump is doing late-night style hosting.

The reality of the situation is much less amusing than “Mike Huckabee YouTube comedy show” implies. After blindly agreeing to review Huckabee, the joke was on me: I signed up to review a weekly talk show that airs on TBN, which is the world’s largest religious TV network. Highlights go to the YouTube channel, and it can be livestreamed via its website. TBN fans can also download apps on Roku and Apple TV. 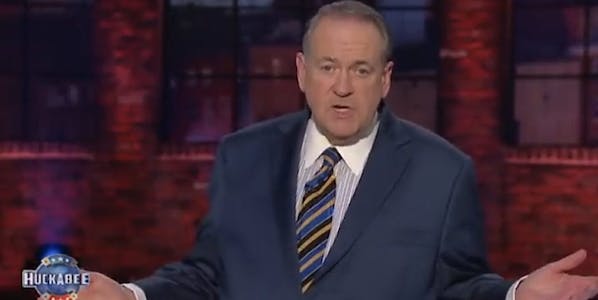 At first glance, Huckabee is a genial show. Huckabee, who is also an ordained minister, delivers monologues, does bits, and has guests—tried-and-true in format and aesthetics. On Huckabee, he reigns in his belligerent ranting, but the sublimely bad jokes that riddle his Twitter feed still abound. This part of Huckabee is what caught the internet’s eye. Bad jokes flop on TV just as easily as they do on Twitter. Honestly, his Twitter material might be better, or at least more interesting.

On a recurring segment called “In Case You Missed It,” Huckabee riffs on under-the-radar stories that should earn easy laughs. But, to quote The Wire, “You want it to be one way. But it’s the other way.” In a Jan. 12 bit, Huckabee riffs on a guy who got arrested for trying to steal a bike in front of a police station. He quips that the police should “charge him for impersonating a criminal,” or, better yet, “attempted theft without using a brain.” A week later and the writing hasn’t improved. On the Jan. 19 show, the 63-year-old Huckabee drops a Snakes on a Plane reference. Credit for trying, I suppose.

During the interview portion of the show, Huckabee brings out guests for friendly chats about the usual conservative talking points. The talking points are pure Fox News, but it’s dressed down to the point that it’s almost beguiling. A recent talk with Alan Dershowitz came off as downright pleasant. The discourse was even-keeled and jovial. The substance is exactly what you expect, but the manner in which it’s delivered is admirable. It’s also kind of terrifying. Luckily, most people don’t watch TBN, and the show’s YouTube views are relatively low. Judging by that and the ample crowd reaction shots, Huckabee may be more insular than a roadside Baptist church.

In one of the more popular clips, Huckabee goes in on comments from Sen. Nancy Pelosi (D-Calif.) about Trump’s border wall. Even though he’s a touch more animated, Huckabee stays calm. Nobody yells or talks over each other on Huckabee. But when he gets to talking about Democrats vs. Republicans, Huckabee can’t keep the disingenuous tenor out of his voice. He compares a wall for the border to the wall around Pelosi’s San Francisco home. A quick Google search will tell you the story is a lie, but that isn’t convenient for Huckabee’s sloppy comparison, so he rolls with it. It’s not like his like-minded audience is going to fact-check him. The mostly senior crowd goes along with Huckabee as he misrepresents Rep. Alexandria Ocasio-Cortez’s (D-N.Y.) views on marginal tax rates. Huckabee wants to be different from the typical political discourse—it’s more of the same.

Just because you say things like a disappointed dad doesn’t give you moral authority or superiority. Huckabee’s commentary on newly seated Rep. Rashida Tlaib’s (D-Mich.) “impeach the motherfucker” remark reeks of insincerity. He acts so appalled by the profanity that he cleans it up to “impeach the bleeping bleep,” Seriously, he censors “mother.”

Huckabee isn’t the treasure trove of comedy and mockery that the internet wants it to be. Instead, it’s a cheesy, lazy, easygoing hour of talking to soothe your concerns, if you share Huckabee’s beliefs. But whether you’re checking out YouTube clips or catching the show’s weekly airing, hate-watching Huckabee is just a waste of your time.