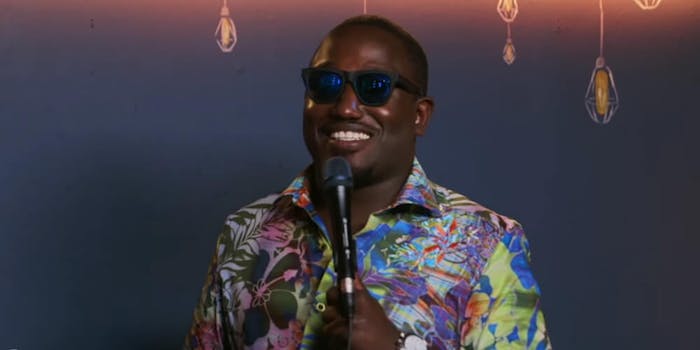 The comedian wants you to donate to a pro-landlord website. And he's not joking.

Comedian Hannibal Buress has found a new calling: Advocating for landlords all across America.

“Wrong,” Buress wrote in response to Sanders’ tweet calling for the implementation of a national rent control standard.

Buress took things a step further and shared a series of pro-landlord tweets and even suggested his 1 million plus followers on the social media platform donate to the Illinois Rental Property Owner’s Association.

Buress then responded to a question about how much is appropriate to tip landlords.

Buress also took a stand in solidarity with Idaho’s landlords who are reportedly paying a larger share of the state’s property taxes.

“Stay strong y’all,” Buress tweeted, along with a news story about the tax hikes.

Buress’ strong rent control views have people questioning whether he’s a landlord, with some calling for him to be canceled for his “pro-landlord activism.”

Others shared memes, using his own popular sayings against him.

— voting biden is elder abuse and a ticket to trump (@jamesdpitley) October 30, 2019

While some would hope Buress’ tweets were written in jest, it is possible that they do reflect his opinions on home rentals. Back in 2016, the comedian told the Chicago Tribune that he recently became a landlord after purchasing three buildings in the windy city. So many believe he is quite serious about his pro-landlord stance.

“Gee I wonder why you’d feel that way,” Twitter user @TigerSammich wrote, sharing a part of the Tribune’s story about Buress becoming a landlord.

the landlord is anti-rent control? who could've seen this coming

After becoming a trending topic, the comedian used his moment of Twitter infamy to push some merch, including hoodies with a screenshot of him on The Eric Andre Show getting booed for trying to correct the host on the number of years Barack Obama would serve as president.

“Why you booing me? I’m right.” he told the crowd.

Evidently, Twitter does not agree with him this time.