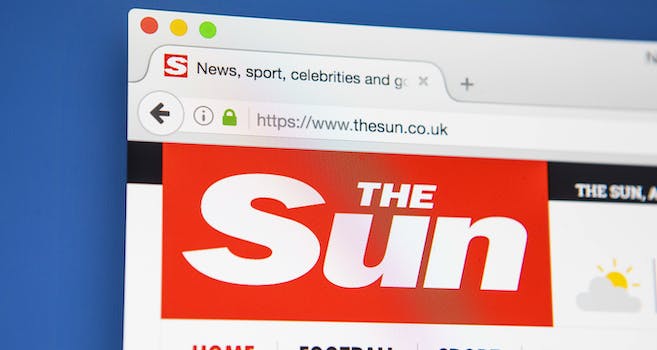 This isn't the first time the paper's ethics have come into question.

In the wake of the soccer WAGs Coleen Rooney and Rebekah Vardy epic feud, where Rooney accused Vardy of leaking her private Instagram posts to the Sun, the hashtag #dontbuythesun trended once again.

Forget Coleen Rooney or Rebekah Vardy. The problem here is the people who own, work for, write for or buy and read the Sun. All facilitating something which does untold damage to people's lives and to society as a whole. #dontbuythesun

Hol' up,
The prime beef between Rebekah Vardy & Coleen Rooney aside for a sec – can we all agree that the Sun is a horrible shitrag that will publish any old unverified shite and that nobody should buy it? #dontbuythesun
OK, as you were pic.twitter.com/7FILRQr5dU

For those not in the know, the Sun—Britain’s best-selling newspaper and popularly nicknamed “the Scum”—is a tabloid with a controversial reputation, which includes a long history of xenophobia, racism, and questionable journalistic practices.

It really is time to stop this poisonous rag doing more damage to the UK.

Who in the hell is still buying this filthy rag? It’s 2019.. there’s actual news out there.. This should’ve died in the 90’s (And I’m being generous)#dontbuythesun

Always nice to see #dontbuythesun trending. Which fuckwits still buy and read it?

Best known for its appalling coverage of the 1989 Hillsborough Disaster, a football match where 96 people were killed and 766 more injured in the Liverpool stands, the Sun chose to blame those fans for the deaths rather than the local police who failed to enact appropriate crowd control measures.

Its coverage included false allegations against the fans, smearing them as hooligans, and accusing them of attacking the police and urinating on the victims. The result of which has been an almost city-wide boycott of the newspaper ever since, with many Liverpudlians even burning any copy they’re given for free.

Local spar tried offering me a free newspaper guess which one?..
Yes the S** looks like a lot were piled on the floor as each one has to be logged that are rejected.. #dontbuythesun or take a free one they're desperate to riddle your brains with shit for news..

Naturally, Liverpudlians and football fans permeated the hashtag, with many wondering what took everybody else so long.

#dontbuythesun
Fuck off,If you didn’t stop buying it after the Hillsborough disaster and now want
a campaign against it due to 2 footballers wives,your as bad as they are!!!

All ppl from #Liverpool know instinctively what to do. All @UKLabour voters know what to do #dontbuythescum #dontbuythesun https://t.co/bjO671iX59

Today my apprentice got me a free copy of The Sun from the petrol station. I had to very politely educate him as to why, as a Liverpool fan, I found it offensive. I also told him if he ever got me one again I would shove it where The Sun dont shine. #dontbuythesun

The paper’s history of racism was also featured prominently in the renewed movement, with a reminder of the infamous article by provocateur Katie Hopkins in which she referred to migrants as “cockroaches” and “feral humans” who were “spreading like norovirus.”

Hopkins and the paper were condemned by the United Nations High Commission for Human Rights, which said the language compared to that used in the lead-up to the Rwandan genocide.

The treatment of Ben Stokes and now Gareth Thomas is more proof that @TheSun is a disgusting, racist, xenophobic, homophobic, horrific and destructive entity – everyone who has any affiliation with it should hang their head in shame. Shut it down. #dontbuythesun #boycotthesun

There were also references to the multiple phone-hacking scandals the Sun has been implicated in, with some suggesting that maybe Vardy really didn’t leak the stories and that the Sun hacked her Instagram instead.

The Sun yet again troll news by deception. Don't believe for a minute that the Vardy camp sold stories to @TheSun I don't have any trouble believing @TheSun
hacked @RebekahVardy
and set up @colleenrooney#dontbuythesun

A couple of Twitter users did think of one reason to buy the Sun—Brexit is coming and with it a potential shortage of toilet paper.

#dontbuythesun – until, as predicted, we run out of toilet paper after #Brexit. The paper's already full of shit anyway.

#dontbuythesun is trending. But if there really is a post-Brexit toilet paper shortage, there may be no alternative.