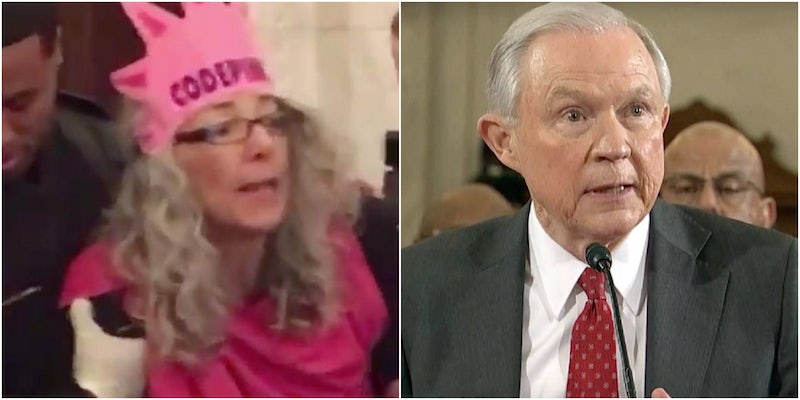 Woman faces 12 months in prison for laughing at Jeff Sessions

Desiree Fairooz faces up to a year in prison for her actions during the attorney general's confirmation hearing.

A Virginia woman could face up to a year in prison for laughing during Jeff Sessions‘ confirmation hearing for attorney general.

The other two activists with the progressive grassroots group Code Pink, Tighe Barry and Lenny Bianchi, were convicted of parading or demonstrating for standing and chanting during the hearing dressed as Ku Klux Klan members.

Sessions, who served as a Republican senator from Alabama from 1997 until his confirmation as attorney general in February, faced widespread criticism for his record on racial issues.

“I felt it was my responsibility as a citizen to dissent at the confirmation hearing of Senator Jeff Sessions, a man who professes anti-immigrant, anti-LGBT policies, who has voted against several civil rights measures and who jokes about the white supremacist terrorist group the Ku Klux Klan,” Fairooz said in a statement.

Sessions has also been accused of lying under oath during his confirmation hearing regarding his contact with a Russian official during the 2016 election. He recused himself from any investigations into Russia’s meddling in the election but has not been charged with any crime.

The comment that caused Fairooz to laugh—which witnesses said was more of an audible gasp than full-blow laughter—was uttered by Sen.  Richard Shelby (R-Ala.), who said Sessions’ record of “treating all Americans equally under the law is clear and well-documented.”

Upon her removal from the hearing, Fairooz, wearing a Code Pink hat that evoked the Statue of Liberty, called Sessions “evil.”

“Why am I being taken out of here?” Fairooz yelled. “This man is evil. You’re evil!”

Fairooz told the New York Times that she did not intend to laugh nor get arrested. “I just couldn’t hold it,” she said. “It was spontaneous. It was an immediate rejection of what I considered an outright lie or pure ignorance.”