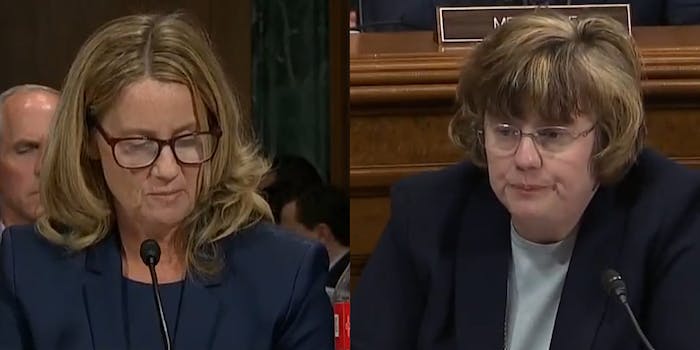 It's a medical term.

The word “sequela” and “sequelae” spiked over 46,000 searches on Thursday after Christine Blasey Ford mentioned the word in her testimony.

When asked by Sen. Dianne Feinstein (D-Calif.) why she waited until now to share the details on her allegations, Ford said she only shared the information with her therapist because she felt that it was an “appropriate place to cope with the sequelae of the event.”

Ford is a research psychologist at Stanford University Medical School and a professor of psychology at Palo Alto University. That might explain why she’s comfortable using words such as “sequela” and “hippocampus.”

People watching the live testimony hastily started to search the definition of the word “sequela,” which is a medical term describing the secondary results of a disease, condition, or injury, according to Merriam-Webster. The condition Ford is referring to is what she says she experienced as Kavanaugh’s attempt to rape her when she was a teenager. The word “sequelae” is the plural form of sequela.

This was me goodling sequela lmao pic.twitter.com/yylDI5mGRd

On the spot, the online dictionary’s Twitter account quickly shared the definition of the word to its 730,000 followers. People thanked Merriam-Webster for clarifying.

TY! There's a reason you've been my fav book since i was a little girl! 😆(no lie, saw my first dictionary when i was 10, it was this giant book on a podium in the library, was like the holy grail of books, vowed i'd read it & i did when i found out they came in pocket versions).

There were also other words Ford used in her testimony that increased the search engine, including “indelible” and “exculpatory.”

(Exculpatory is a legal term that means, basically, favorable evidence for a trial’s defendant.)