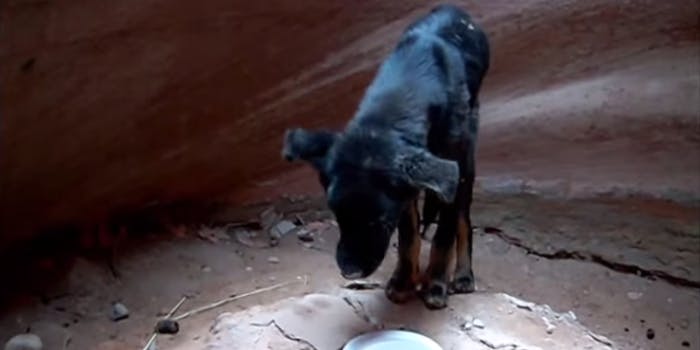 Man finds a new best friend in the unlikeliest of places.

This one is a puppy rescue mission for the ages.

Back in 2010, Zak Anderegg was hiking in Arizona when he made a surprising discovery at the bottom of a canyon. It was a ragged-looking puppy, and while he didn’t appear to have any broken bones, he was malnourished and in terrible shape. Because of that, Anderegg figured that there was no way that the dog got down there on his own.

“The more I think about it, someone put this dog there,” he said, showing the roughly 350-foot drop to the bottom with his camera. “Which is why I am so mad about this.”

For him, going back down to feed and rescue the dog, whom he named Riley, was a no-brainer. He documented much of the rescue mission on video:

He even appeared on Ellen a few months later with Riley, now a happy and healthy dog.

Riley’s recovery, which was told in Anderegg’s book Rescuing Riley, Saving Myself, was a long one; doctors discovered three shotgun pellets underneath his skin from his abusers and teeth blackened from malnutrition. But after joining Anderegg’s family, he and Riley went on to make new memories. The book came out six months ago, but more and more people are discovering Riley’s story after it hit the front page of Reddit.