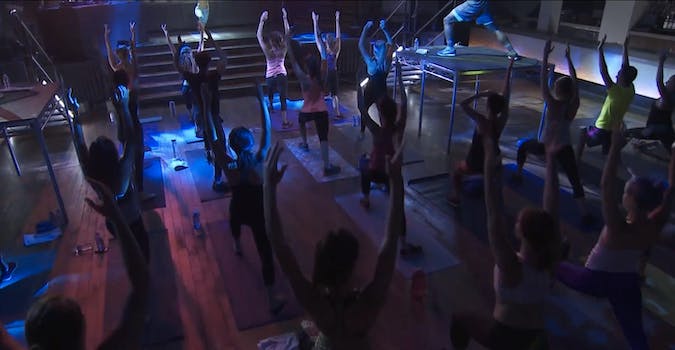 These YouTube channels want to help you get fit in 2015

Sweat off the holiday pounds.

With the holidays over and New Year’s resolutions fresh on your mind, many people’s first stops in January is at a gym. Unfortunately, thanks to everyone having the same idea about keeping their fitness promises, gyms tend to be can be overcrowded and sweaty. These packed-to-the-gills spaces breed nothing but discouragement, and a lot of would-be fitness converts give up before they even begin.

Thankfully, YouTube is here to help you you keep your resolutions in the comfort of your own home. With a variety of styles of channels focused on fitness and wellness, every would-be workout star can get a kickstart on their New Year’s promises without setting foot inside an actual gym.

If you’re looking for a fun entry point into fitness, dance might be the answer. You were just hitting the dance floor on New Year’s Eve, right? YouTube has you covered with a wide variety of dance tutorials that go beyond simply learning the steps to crafting actual workouts while you’re having fun.

Los Angeles-based GROOV3, created by choreographer Benjamin Allen, leads a dual existence: daily live classes and online lessons. Their motto is to never stop dancing during your workout, and to learn short routines that work with a variety of songs, instead of something lyrically based. Their instructors even had the honor of performing a flash mob at YouTube Space L.A.‘s Halloween party.

For more of a EDM and club feel, BeFiT’s FLIGHT series is a standout. The vibe is super high-energy, with instructor Sydney Benner leading you through moves while strobes flash and participants perch on platforms. There’s an ’80s sensibility to that sort of layout, but it’s fully modernized. If you want your workouts to feel like a party, FLIGHT is your destination.

YouTube is, of course, a place for viewers to connect more directly with creators. In that line, there are lots of fitness options that hinge on a personal connection, not a party.

The Lean Machines are an adorable duo of personal trainers, John Chapman and Leon Bustin, who give a connected approach to their 181,000 subscribers. Their fitness videos range from workout instructions and health plans to motivational videos and healthy recipes. It also helps that they’re funny and nice to look at, and they’re not afraid to make fun of gym life.

SixPackShortcuts includes the magic word all new-to-fitness viewers are looking for: “shortcut.” Mike Chang, who commands an audience of more than 3 million subscribers, shows viewers how he went from flab (complete with, in his word, embarrassing photos) to a six-pack and a healthy life. It’s not just ab workouts, however; Mike branches out to topics like “how to do yoga for muscle gains” and how to “increase sex drive by juicing.” His ab story is his bread and butter, though, and it’s highly inspiring.

If you don’t want to connect with a vlogging personality, and you are looking for more direct, instructional type exercise videos to craft a daily workout, YouTube still has you covered.

In addition to dance, BeFiT is also host to a variety of workouts, from WWE training series to 161 video workouts you can do in under 10 minutes each.  They also work with top names in fitness, including  Jillian Michaels, Denise Austin, and Jane Fonda.

Another popular option is FitnessBlender, which shows off moves and workouts on a soothing white background. Created by a husband and wife team, the channel shares three to five new workouts per week, from shorter five-day workout challenges to massive, hour-long videos that mimic full classes.

Whatever way you want to get in shape in 2015, YouTube’s fitness channels have something to satisfy your fitness itch.