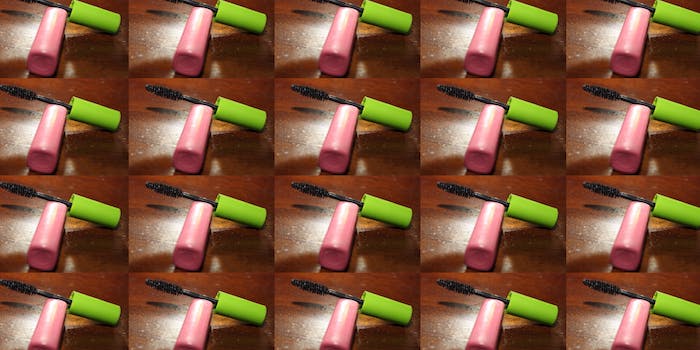 The more than 254,000 disciples of Younique will tell you that #ItAllStartedWithMascara.

They’ll tell you that the online direct sales brand’s popular 3D Fiber Lash mascara, and recently released 3D Fiber Lash Plus mascara, account for its tremendous growth in less than three years. And they will share it, pin it, and tweet it, too.

That’s because Younique is the self-described “first direct sales company to market and sell almost exclusively through the use of social media”—and by all accounts, that’s true. The brand’s signature mascara product—the one that started it all—has flooded Facebook, Twitter, YouTube, and even Periscope to make its presence something of a behemoth online, a serious meme if you will. The company’s curly q-ed logo has become so ubiquitous in social media spaces as to inspire a backlash of tweets like “Stop trying to make Younique Mascara happen…it’s NOT going to happen !” Where older generations may remember dodging door-to-door Avon sales or attending living room Tupperware parties, Younique is now targeting consumers where they live: on the web.

Though technically still tiny compared to more established competitors like Mary Kay and Avon, Younique is gaining ground and followers. Though the company is well known for its mascara, the cosmetics line has since expanded to include brow gel, lip stain, lipstick, concealer, foundation and a multitude of shimmery eyeshadows. When Younique celebrated its second anniversary in late 2014, the $300 million upstart was seeing 5,145 percent year-over-year growth with less than half the presenters it has since acquired. The company now spans products and countries, including the United Kingdom, Australia, New Zealand, and Canada, and will continue its global expansion this year.

“I don’t know if, without the power of social media, [the mascara] would have spread as quickly as it did,” says Brian Gill, Younique’s Chief Marketing Officer. “We have, from day one, been working on diversifying ourselves on social media.”

Just by virtue of being makeup, Younique’s products lend themselves much better to the Internet’s queue of YouTube tutorials, Instagram selfies, and Periscope broadcasts than, say, detox smoothies or fair trade handbags.

“What we do is very demonstrable,” says Gill. “It’s easy to show.”

And presenters, what the company calls its salespeople/devotees, aren’t shy about showing it, whether it’s with dramatic before-and-after comparisons of two lashlines (one pumped up with fiber mascara and the other bare), simple video presentations of product application, or even Photoshopped graphics or quotes about loving your lashes or running your own business. If you are friends with a Younique presenter on any social media platform, you likely know it.

Younique’s products just so happen to be an inherently good fit for social selling, but the company’s almost instantaneous online success was pure design. Launched in 2012 by Derek Maxfield, founder of software company NetSteps, and his sister Melanie Huscroft, Younique was engineered to function fully online before the siblings even decided on what they would sell.

“[Maxfield] quickly decided on a direct sales party plan and not the traditional party plan—the in-person, invite your girlfriends to your house one,” says Gill.  “He wanted to do virtual online parties.”

Only later did fiber mascara enter the equation, along with customers, recruits and a whole line of cosmetics and skin care. The dramatically-lengthening mascara did prove to be a huge boon for the company, selling 15,000 units a day before the formula was improved upon in early July. In the first two months of its 2015 debut, the 3D Fiber Lashes’ followup, 3D Fiber Lashes+, has sold more than 620,000 units and counting (literally—there is a counter on Younique’s website that ticks in real time).

Direct sales for makeup has deep roots. When Mary Kay Ash first introduced the “traditional party plan” in 1963, her idea to connect women face-to-face in their own living rooms with in person demonstrations, discounts, and beauty tips became the go-to business model for many direct sales companies since. Younique’s pioneered Virtual Party System (TM symbol included) is the 21st century response that looks on track to do the same. “Basically the idea being that you don’t have to do the home parties so you’re not just limited to the people that show up to the party but rather all of your friends anywhere and their friends,” Deanna Foster, a presenter who has been with the company since it launched, told me.

The idea takes away the geographic necessity of catering solely to neighbors and friends by taking away the actual act of throwing a party. It sounds simple because it is—no prep, no cleaning, no baking, no babysitters, and no mingling. Presenters simply create a Facebook event, invite their friends, and use the wall space to play games (guess which lashes are Younique lashes), share inspirational quotes (“Friends don’t let friends have lil lashes”), and post tutorials.

Of course, skipping the IRL hassle likely appeals to the nearly 90 percent of direct sales professionals who sell part-time, often in conjunction with full-time positions. The virtual ease of an online based business like Younique is what attracts so many working women to its ranks.

“I could sell from day one, and directly from my website,” says Jessica Ulery, a Yellow Status presenter from Indiana. (Different stages of sales success are demarcated with color statuses, ranging from White Status—”Entry Presenter”—to Black Status—”Exclusive Presenter.”) “I set up my website in less than five minutes and I could sell right then.”

Because the whole system—sales included—functions online, presenters also get paid faster than your typical direct sales independent contractor. One of the company’s selling points for new recruits is the perk of receiving commission (called “royalties”) three hours after selling a product.

And since recruiting is an essential facet of any direct sales company, streamlining the system can’t hurt Younique’s bottom line. Converts are onboarded quickly via virtual training called the Youniversity Training Academy  and video tutorials. Each receives their own website, free of the maintenance fees required by some direct sales brands, and is given basic social media training on what not do (namely, flooding feeds with content) before being sent out into the world wide web to peddle their wares.

Essentially, what Younique presenters are doing online isn’t much different from what everyone else is doing on the Internet: branding, building, tweeting, monetizing, and perpetually pushing products or content, sometimes past the point of tolerance. Even Kim Kardashian, for example, was knocked earlier this summer for plugging the morning sickness pill Diclegis on her Instagram, just the latest endorsement in a deluge of branded posts by a family at the top of their own social media empire. Charlie Sheen has made a veritable career out of trading tweets for cash and we all know the parable of The Fat Jewish Instagram sensation, who reportedly rakes in $6,000 for single product placements. It can seem like everybody, everywhere is using social media to sell something, whether it’s an image or a brand or a product.

But for consumers who are often times weary of the direct sales business model, the potential for too much content can quickly be realized.

“One of the things we have to be so careful about in the industry, because a lot of the people who sell for us are not professional marketers so there is always that tendency to spam your friends,” says Jennifer Fong, a marketing and communications consultant for businesses in the industry.

Spam, or scam rather, is a topic that comes up a lot when consumers mention direct sales companies. Because of the multi-level marketing model whereby recruiting is as, or even more, important than selling products, many people incorrectly identify such companies as pyramid, or Ponzi, schemes. In reality, Younique is Better Business Bureau-accredited and praised by employees and customers alike.

Since Avon first began selling perfumes in the late 19th century, direct sales people have combatted such consumer unease by cultivating personal, face-to-face relationships with clients. The industry started, after all, with door-to-door sales and in-person pitches and thrived under the in-home party system. Despite this, many Younique presenters feel the potential for authentic connection is still possible online.

“With social media, you have to build relationships and it’s just not as simple as, ‘Oh let me go on, follow a bunch of people, and see what happens,” says Jamie Ketola, a Blue Status presenter with 2,737 Twitter followers. “I’ve been in sales my whole career so I think people see right through the phony.”

Of course, personal connections online don’t always end in a purchase. Though Ketola was thrilled to have a pin “crushing it” on Pinterest, she conceded that her strong social media presence is more about “laying the groundwork” for her business. Likewise, Claire Laidman, a very recent recruit out of England says she’s had more success with her newly minted Facebook business page than she has with her well established Twitter following. “It’s mainly people that know me personally [on my Facebook page] so I guess trust that I wouldn’t be selling something I don’t believe in myself,” says Laidman.

A 2014 study conducted by the Direct Selling Association, the industry’s national trade organization, suggests many direct sales marketers feel the way Laidman does. Though companies are continuing to use the Internet and virtual parties to expand their reach, marketers still ranked social media platforms lower in effectiveness for sales than home parties, telephone calls, email and personal contact and lower in customer retention effectiveness than telephone calls, personal contact, email and even snail mail.

Still, one can’t help but wonder if social media and virtual parties aren’t the magic bullet in-home parties became for direct sales decades ago. When Mary Kay first introduced the in-home party system in the 1960s, it changed an industry, making it more convenient, and arguably more acceptable, for women to enter the direct sales cosmetics game. Younique’s Virtual Parties, which have already been adapted and mutated by other companies to the point of obscuring their origin, are certainly doing the same.

“It’s been an incredible blessing to the industry because it really has enabled us to reach beyond our borders,” says Fong. “It used to be in direct sales that you could only reach the people in your geographic area, for the most part, now we have the opportunity to reach so many more people.”

For Younique, that opportunity means expanding into Germany, the first non-English speaking country in its already global arsenal, this past August. Come October, women in Mexico will also be able to buy and sell and spread the gospel via Twitter, et. al., sending the brand well on its way to being as international as the Internet itself.

Photo via Jenn Durfey/Flickr (CC BY 2.0) | Remix by Jason Reed