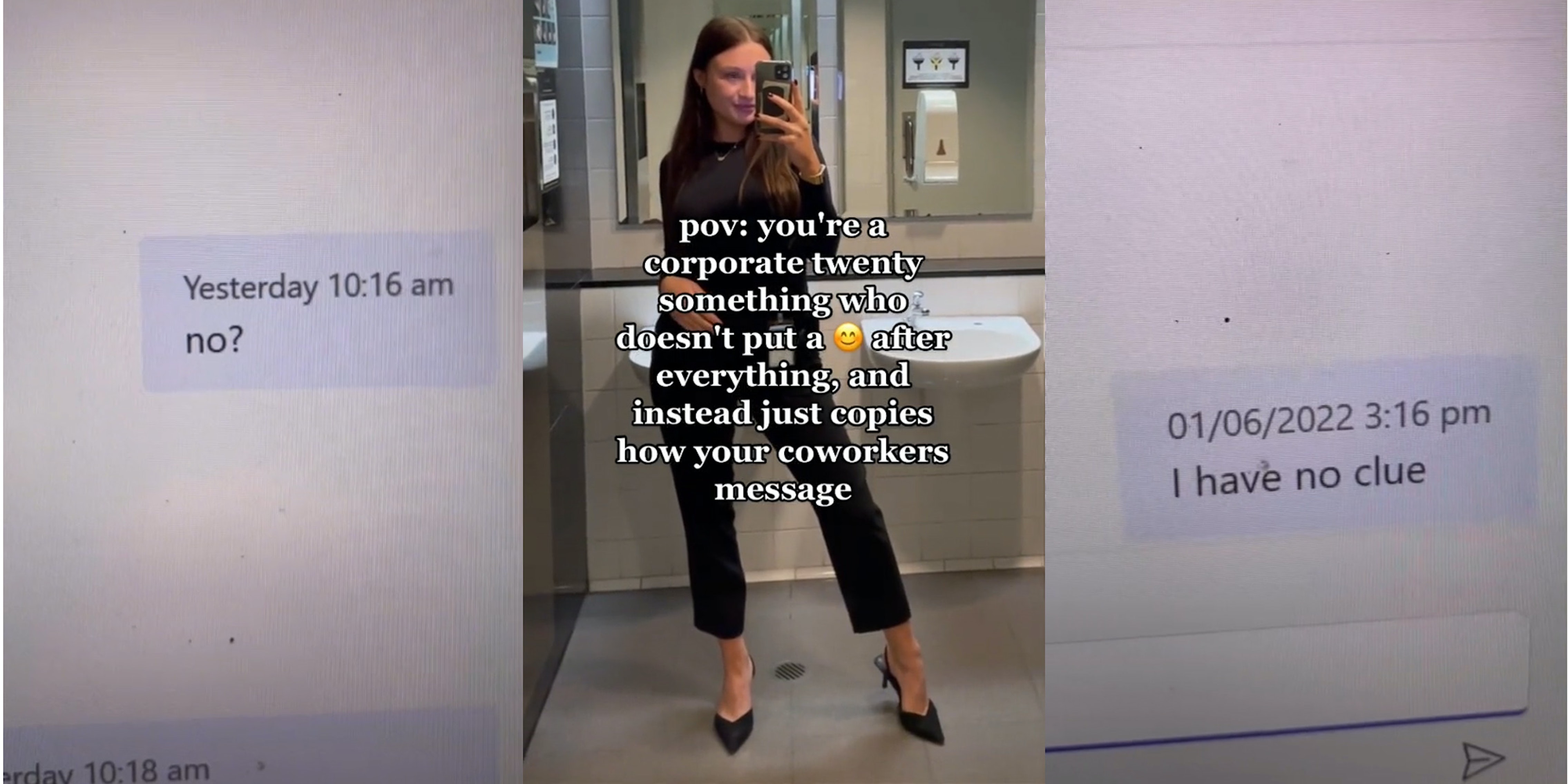 ‘Just because you might think it sounds mean, doesn’t mean they perceive it that way!’: Young professional says she will not placate expectations at the office by being overly emoji-centric in her correspondence, sparking debate

'No because if my coworkers don't send smileys I just assume they hate me.'

A corporate worker is encouraging viewers to ditch the emoji and to “[match] the energy” of their co-workers in their professional correspondence in a now-viral TikTok, sparking debate in the comments.

In the video posted by TikToker Hattie (@hattietok_) on Tuesday, she poses in front of a bathroom mirror presumably at her office. The text overlay reads, “POV: you’re a corporate twenty something who doesn’t put a [smiley emoji] after everything, and instead just copies how your coworkers message.”

“Come on guys, be brave and change this trend!” she added in the caption. It seems Hattie is referring to the TikTok trend of corporate “twenty-somethings” saying they use emoji in professional settings so as to not come off as “rude.”

The video has garnered over 944,000 views as of Thursday, with commenters debating how to juggle emoji-centric and emotive correspondence expectations with “blunt” professionalism.

“No because if my coworkers don’t send smileys I just assume they hate me,” one user wrote.

“Me: types a message matching their energy, and then deletes it and sends one with a smiley instead,” a third wrote.

“I don’t do this and everyone says I’m “standoffish” like I’m sorry I didn’t know I had to baby co-workers with emojis,” a third added.

Other commenters said that they feel “empowered” by writing more direct, to-the-point messages.

“I’ve started doing this last week. I feel so empowered,” one commenter wrote.

“It’s so liberating becoming comfortable not using any exclamations or emojis,” another said.

“I saw this yesterday and was like everything is subjective. Not my issue how they decide to portray my messages,” a third added.

In a response to commenters who felt “anxious” about dropping the emoji and exclamation points, Hattie suggested that “people don’t read into it as much as you think” and to just “try it.”

“Just because you might think it sounds mean, doesn’t mean they perceive it that way!” Hattie wrote.

The Daily Dot reached out to Hattie via TikTok comment.