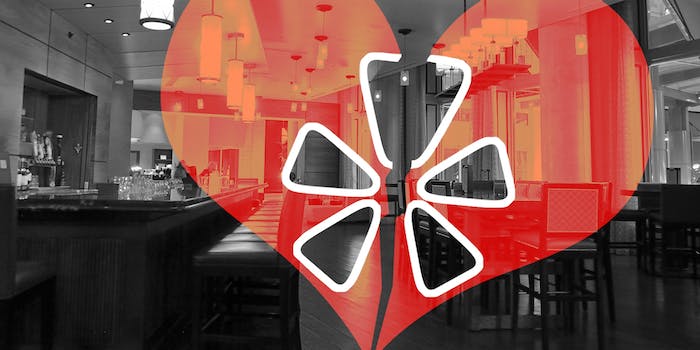 These Yelp reviews are actually chronicles of a broken heart

"I wondered if he shared croissants with his new lover. I wondered if they tasted even better than the ones with me."

Chase Compton, 31, is not your average Yelp reviewer. For one thing, he’s a significantly better writer. For another, he doesn’t pepper his reviews with dumb, made-up adjectives like “yumtastic” and “fabuloso.” And for another, he’s using Yelp as a platform to write a digital memoir of the collapse of his relationship.

For the past four months, Compton has been detailing his breakup with his ex-boyfriend in reviews of bars and restaurants the two visited while they were a couple. The Yelp reviews have “become a topographical map of my love story,” Compton recently told Business Insider. “It’s like dropping a pin on a subway map of New York City.”

While Compton’s writeups are similar to other Yelp reviews in that they contain details about the food, atmosphere, and decor of an establishment, they’re also brimming with evocative language and poetic descriptions of what it’s like to love and lose in a big city. The result could come across as florid, snarky or maudlin, but it’s a testament to Compton’s creativity and talent as a writer that for the most part, it doesn’t.

Note, for instance, this excerpt from his writeup on Cafe Mogador, a Moroccan cafe on Manhattan’s Lower East Side, which juxtaposes glowing descriptions of the service and the halloumi eggs with this poetic interlude:

Café Mogador is “our place.” It was the scene for some of the best breakfasts of my entire life.  Being madly in love, I would sit on the patio (which seems to be perpetually situated in springtime) and stare longingly into his eyes like I could fall into them like an endless cup of dark brown coffee. We’re that couple. It’s kind of gross, I’ll admit to it. And have you ever seen someone try to use a knife and fork while holding someone’s hand? It’s like a one-handed-clap, and it’s really kind of hard to get anything done.

Ever since I first met him, I knew that I would forever live on the patio of Café Mogador with him. Days I’m not there, I picture my table out there goes completely unseated. Surely my ghost haunts it, hand in hand with his ghost, eating ghost merguez as fast as we can.

Or this excerpt from Compton’s review of Dean and Deluca in Soho:

Moving slowly from the produce department with one foot in front of the other, I found myself staring at a case full of gorgeous pastries. My eyes locked on a pile of the most beautiful almost croissants I’d ever seen.

Instantly I was taken back to our morning walks we used to take and the almond croissants we had shared while walking up Lafayette, which had somehow or another become the most traveled street in our day to day. He’d take massive bites, and wind up with powdered sugar and big flakes of dough stuck in his dark red facial hair. With my free hand not clutching a cup of coffee, I’d reach up to dust him out and he’d smile at me. I wondered if he shared croissants with his new lover. I wondered if they tasted even better than the ones with me.

Is Compton, who describes himself as a “literary Banksy” for the downtown brunch-and-mimosas set, actually a helpful Yelp reviewer? Not really; if you’re looking for guidance on where to find the best banh mi in Williamsburg, or how the service is at the Shake Shack in Union Square, his reviews probably aren’t the best place to look. But do they serve as a beautiful testament to the fragility of the human heart, in a place where you’d least expect to find it? Absolutely.