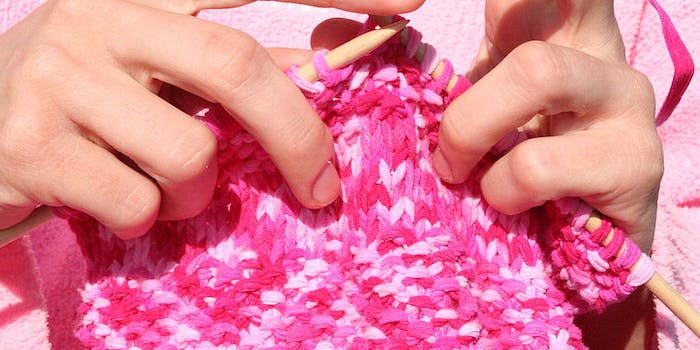 104-year-old yarn bomber might be the oldest street artist

The centenarian helped cover her Scottish town in yarn.

Move over, Olek! Having been denied funding for an event in conjunction with the YES Arts Festival, one group of knitters who call themselves the Souter Stormers took matters into their own hands and yarn bombed the towns of Selkirk, Ettrickbridge and Yarrow in Scotland.

The guerrilla group of knitters included Grace Brett, a 104-year-old woman who may now count as the world’s oldest street artist.

Brett was born in London in 1910, and worked as a telephone operator. She has lived in Scotland since 1978 and told the Scottish Daily Mail that she “thought it was a really good idea to decorate the town and enjoyed having my crochet included.” She humbly told a video interview, “It’s very nice of you to take any notice.”

The yarn bombing ladies spent months planning their projects, which will be displayed through the beginning of October. Brett’s daughter told the Daily Record “[s]he thinks it is funny to be called a street artist.”

The gang yarn-bombed 46 sites across the towns, with some incredibly intricate work, including knitted and crocheted flower garlands, food and books.

Have to say I'm very impressed by the Selkirk knitters! #ninjaknitters #yarnbomb pic.twitter.com/colYSK2d0u

Brett may be the oldest Stormer, but most of them are over 60—finally bringing the imagery of Monty Python’s “Hell’s Grannies” sketch to life. And really, who’s to say street art is only for the young and edgy?