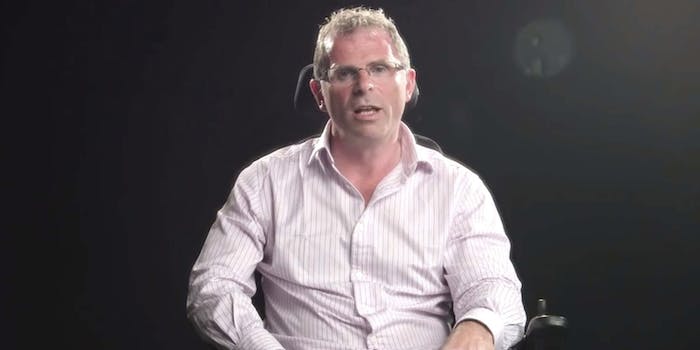 The video, #inthedark, was made in honor of World MS Day, which raises awareness of the disease.

May 27 is World MS Day. So to raise awareness of the disease, the Multiple Sclerosis Society of the UK brought together people who have worked with them on past projects to make a video, #inthedark, in which they describe the symptoms they were experiencing before they were diagnosed.

In the video, one man says having MS felt like “an alien had injected something” in his leg, while another man says he thought perhaps he had a really bad hangover and remembered he hadn’t had anything to drink the night before. The goal of the video is to help people feel like they’re not #inthedark about their MS symptoms.

“There were quite a few key phrases that alluded to this darkness, some of which didn’t make it into the final edit,” Ben Noble, digital media editor of the MS Society and producer of the video, told the Daily Dot in an email.

“The idea of being left in the dark was interesting from a filmmaking point of view as it allowed us to have a more creative lighting design – with the single light source coming off from the right-hand side of the frame, and the black background.”

Noble’s goal in making the video was to make MS sufferers feel stronger and more empowered. “The person with MS was also backlit to make them stand-out; a technique inspired by music videos – to empower the person in frame and give them a sense of dignity, despite being ‘alone in the dark,'” he said.