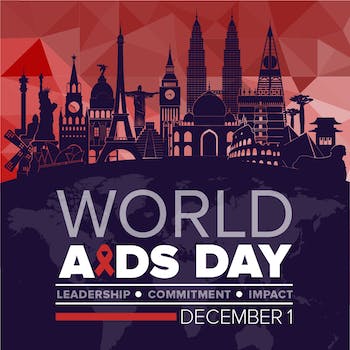 Over 36 million people worldwide are living with HIV or AIDS.

World AIDS Day, held on Dec. 1 every year, is an opportunity for people across the globe to come together and show support for those living with and those who have died from HIV and AIDS, and to further dialogue about prevention, treatment, and cures.

Though the conversation around HIV/AIDS has quieted since the 1980s and ’90s, the Center for Disease Control (CDC) estimated in 2013 that more than 1.2 million individuals over the age of 13 were living with HIV in the United States; worldwide, over 36 million people are living with HIV/AIDS, according to the World Health Organization. Despite advances in HIV treatment, large portions of the developing world such as Sub-Saharan Africa and Southeast Asia are unable to afford medication or to implement preventative education. Those living in poverty are disproportionately affected by the HIV/AIDS epidemic, both in the U.S. and abroad.

However, there are ways you can bring back the needed attention to HIV and AIDS. Here’s how:

OK, so “fun-runs” aren’t fun for everyone, but baked goods can be! Set up a community or individual event and donate proceeds to a local or national HIV/AIDS charity in your state, province, region, or country.

Positive Spin has been nominated for a Webby Award! Help us share these stories of people living healthy and full lives with HIV. #VOTE for Positive Spin. The link is in our bio. #webbys #mypositivespin

Positive Spin is a series of stories from real people about their “unique experiences along the HIV Continuum of Care,” according to its official website. If you have and are comfortable sharing your own experience with HIV, Positive Spin encourages you to use the #mypositivestory hashtag this World AIDS Day. People may use the hashtag to direct to the website, where people can learn more about their HIV status, care, and treatment, and how to get tested.