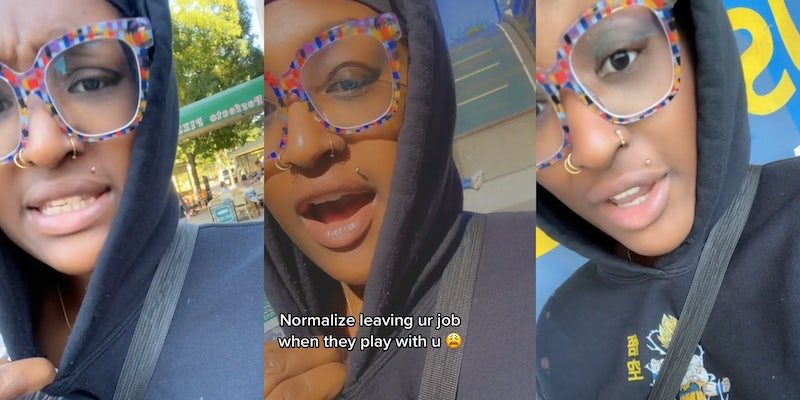 ‘I don’t think I’m built for 2022 food service’: Worker walks out after customer allegedly threatened her—and her co-worker gave him a free meal

'A grown man threatened me with physical violence over food.'

A food service worker went viral on TikTok after sharing an incident in which a customer allegedly threatened her, leading her to walk out during her shift.

“So I just clocked out and left my job because a grown man threatened me with physical violence over food,” user @brokeassfemale began her clip.

Her video, reaching over 188,000 views, has sparked a discussion about the treatment of food service employees.

The TikToker says that during a slow part of her afternoon shift, a customer came in and was immediately angry that she was on her phone.

He allegedly started berating her. Even as the TikToker greeted him politely and tried to move along with the interaction, he wouldn’t stop.

She says she then started to wait on the customer behind him, but he still was threatening her.

“You give him anything, I’m knocking it on the floor. You ain’t giving nothing until you serve me,” he allegedly told her.

@brokeassfemale then went to get one of her co-workers for help. She says the cook was able to get the man to calm down, but @brokeassfemale reiterated she didn’t want any further interaction with the customer.

When it came time for him to pay, the cook asked @brokeassfemale to help him check out. However, at this point, the man was allegedly still threatening her, saying he was going to smack her. The TikToker, again, refused to deal with the customer.

However, she claims her co-worker then gave the man his meal for free, which led her to immediately walk out.

“I clocked out and walked out,” she says.

“The disrespect of both men, I’m glad you’re okay and that you left,” said @punkinbrown71.

The Daily Dot reached out @brokeassfemale via Instagram direct message.