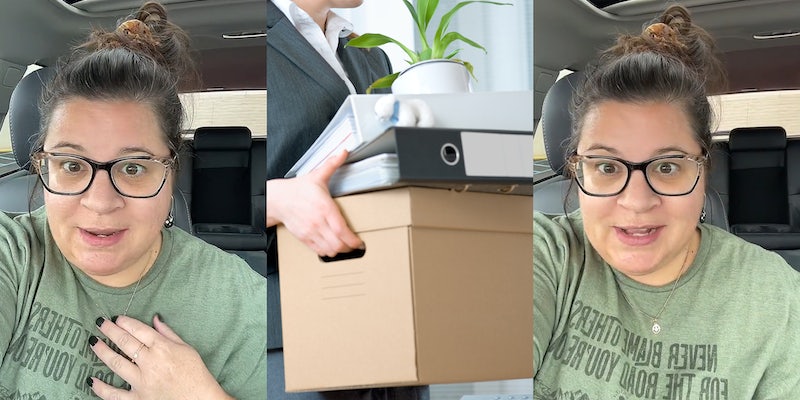 ‘Instead of being honest, they acted like it was a glitch’: Worker was ‘accidentally’ fired—then fired for real the next week

'I got fired twice from the same company.'

A frustrated TikToker shared her experience getting fired not once, but twice, from a company she’s calling “toxic.”

In the video, user @samandtuckco_ explains that she initially realized something was wrong the previous week when she was completely shut out of the system utilized by her company. When she eventually got ahold of someone two hours later to ask what was going on, she was allegedly told it must have been an accident.

The worker was “reinstated” at the time, but on Tuesday of the following week, something happened that caused her to gain a new perspective regarding previous events.

“I got fired for real,” she explains in the video. “I got fired twice from the same company. What the hell?”

The TikToker called the company “toxic” for its handling of the situation, which read to her and many of her viewers as dishonest.

“obvs the co. was planning it but messed up the date & instead of being honest they acted like it was a glitch,” one user commented. “Sounds toxic to meeee.”

“Trust me… your ‘boss’ knew you were on the list already. I’ve heard shit from after they let me go… they knew the whole time,” another agreed.

A third viewer claimed, “It’s not toxicity it’s incompetency of HR and managers.”

User @samandtuckco_ further elaborated that her company has been laying people off for months due to market conditions. She says her disinterest in being “an ass kisser” likely landed her on the chopping block.

The Daily Dot has reached out to @samandtuckco_ via TikTok comment.