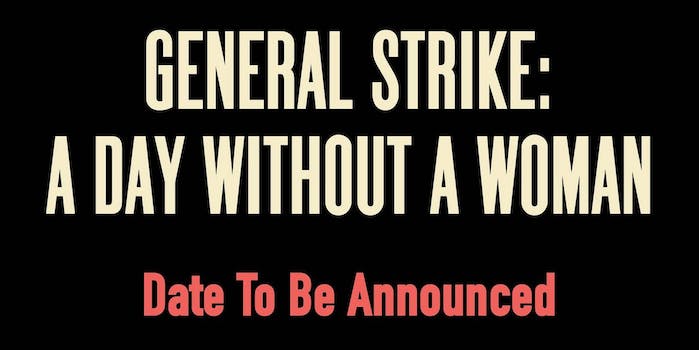 Women’s March organizers announce ‘a day without a woman’ strike

'The will of the people will stand.'

As we enter the third week of the Trump administration, protests and boycotts show no signs of stopping. In fact, many people have been speaking of staging a national strike, a day in which no money will be spent and no work will be done in protest of the government.

Women’s March organizers are also hinting at organizing a strike of their own, with the date to be announced.

The will of the people will stand. pic.twitter.com/SKJCRLhRKn

Other calls for a general strike have set the date as Feb. 17, inspired by Francine Prose’s article in the Guardian. “Let’s designate a day on which no one (that is, anyone who can do so without being fired) goes to work, a day when no one shops or spends money, a day on which we truly make our economic and political power felt, a day when we make it clear: how many of us there are, how strong and committed we are, how much we can accomplish,” writes Prose.

So far 15,000 people have committed on the Facebook event page, but without a central organizer, the turnout could be far larger. Journalist Eoin Higgins argued, however, that this date is the Friday before a holiday weekend, which could kill any momentum gained from it. He suggested that the strike should have taken place today, which obviously did not happen.

For those who question the influence a general strike could have, last year women across Poland went on strike over what would have been one of the most restrictive abortion laws in the world. Minister of Science and Higher Education Jaroslaw Gowin said the strikes “caused us to think and taught us humility” and Polish Parliament quickly struck down the law.