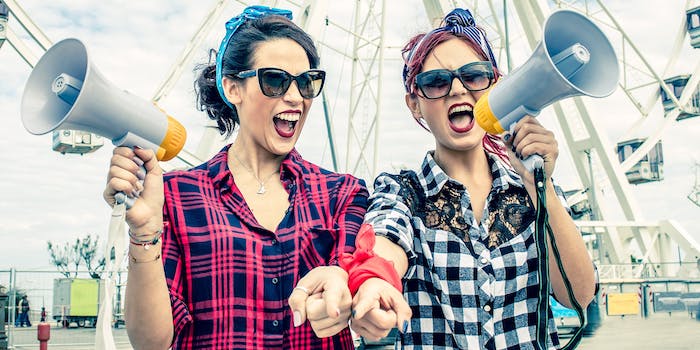 Does that mean the wage gap and rape culture magically disappear?

President Obama has upheld today as Women’s Equality Day, and in his proclamation brings up issues of domestic violence, sexual assault, and trans rights. Yay Obama!

Women’s Equality Day, which falls on the anniversary of the passing of the 19th Amendment in 1920, has been celebrated since 1971. In a statement released yesterday by the White House, Obama notes the “boundless courage and relentless commitment” of the women who fought for the right to vote. Though it would take until the Civil Rights movement of the 1960s for black women to be effectively enfranchised, the 19th Amendment provided the right to all women.

“Today, as we celebrate the anniversary of this hard-won achievement and pay tribute to the trailblazers and suffragists who moved us closer to a more just and prosperous future, we resolve to protect this constitutional right and pledge to continue fighting for equality for women and girls,” the statement read.

President Obama notes the great strides we’ve made since 1920, but says “such progress is not inevitable, and we must keep moving forward on our journey toward equality.” He names such issues as equal pay, abortion rights, affordable child care, parental leave, domestic violence, and the “escalated levels of discrimination and violence” trans women face.

“On Women’s Equality Day, as we recognize the accomplishments that so many women fought so hard to achieve,” he said, “we rededicate ourselves to tackling the challenges that remain and expanding opportunity for women and girls everywhere.”

Unfortunately, his proclamation doesn’t immediately impact the inequalities that women endure in the day to day. It won’t make the wage gap or rape culture go away. But hey, it’s a nice gesture that provides some much-needed recognition to the issues facing American women.

Online, people are praising the president, and posting reminders of how far we have to go for true equality.

Today is Women's Equality Day, yet we are still striving for equality. Ex: Women earn $0.77 for every $1 a man makes. #WomensEqualityDay

The U.S. is the only developed country in the world without paid family leave. #womensequalityday

Every woman's vote was bought by the sweat & blood of her mother & grandmother. #WomensEqualityDay pic.twitter.com/8qPhbZdnRN

If the group you want to celebrate had the right to vote since America’s founding, then, sorry, you don’t get a day, dude.

Update 10:10am CT, Aug. 26: The White House also announced 29 newly committed employers to the White House Equal Pay Pledge, which was launched earlier this year at the United State of Women Summit. In a statement from the White House, the pledge requires employers to commit “to conducting an annual company-wide gender pay analysis across occupations,” review hiring processes to reduce unconscious and structural bias, and embed “equal pay efforts into broader enterprise-wide equity initiative.”

New signatories include tech companies like Apple, Dropbox, Facebook, IBM, LinkedIn, MailChimp, and Microsoft. “We’re now analyzing the salaries, bonuses, and annual stock grants of all our employees worldwide,” said Apple in the statement. “If a gap exists, we’ll address it. And we’ll continue our work to make sure we maintain pay equity.”