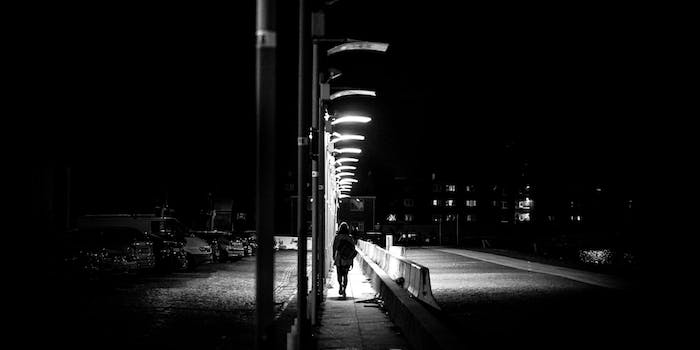 Women explain how their lives would improve if men had curfews

The world would be a better and safer place.

Imagine if every single man in the world had a 9pm curfew. As soon as the night turned late, men had to go back home and stay indoors, and women, nonbinary people, and gender nonconforming folks could go out and do as they pleased at night.

That’s the premise behind a viral Twitter thread shared by over 1,000 Twitter users, with people across races, gender identities, and locations sharing the experiences they wish they could have in a world where predatory men weren’t a concern.

Ladies, a question for you:

"What would you do if all men had a 9pm curfew?"

"It is very hard to survive as a woman in this world, and I remember saying once that if I stopped to feel, really feel, the pain of the oppression I encountered, I would start screaming and I would never, ever stop."https://t.co/0vA3F2r3mL

The viral question was posed by Danielle Muscato, the host behind The #Resist Podcast. In an interview with The Daily Dot, Muscato explained that she had originally posed the same question in April 2017. Amid the sexual assault allegations levied again Brett Kavanaugh, she decided to return to the question as an opportunity to center women and gender nonconforming peoples’ voices over sexual harassment and assault. In turn, she believes this can help men learn how their everyday life experiences differ drastically from women’s stories.

“The original inspiration was based on a conversation with my friend Sarah, who is a cis woman,” Muscato told The Daily Dot. “I’m a trans woman, and I was trying to explain to her what’s different about friendships between men and women, between men and other men, and between women and women, and what I learned in the process of coming out and shifting my friendships like that.”

While men are less likely to be vulnerable and intimate with each other due to toxic masculinity, women “have something of a camaraderie” that springs from “surviving in a patriarchal society and trying to escape from toxic masculinity,” Muscato explained. She believes the only way to heal from toxic masculinity and misogyny is through “fighting ignorance and advancing empathy,” and that means giving people across marginalized gender identities the opportunities they need to share their stories.

“I was thrilled to see it getting so much attention—lots of cis men responded too, and I think that’s great,” Muscato told The Daily Dot. “A number of people really seemed genuinely shocked at the kinds of mental exhaustion women have to endure every day just navigating our lives, in ways that cis men simply can’t understand because it doesn’t exist in their world.”

Some women mentioned how they would go for a walk late at night, start jogging, or go grocery shopping after dark.

I would go outside or to a park at night. I love the nighttime outside when it's so quiet, and there is a quiet contemplative beauty to the world, especially in the city. But is hard to enjoy it when I'm hypervigilant to possible threats (getting mugged/assaulted/kidnapped).

Go out to bars by myself, walk with both headphones in my ears without my keys in between my fingers inmy hand.

Hi! Sure! I’ve also while waiting for a friend, had a female bar tender watch my drink behind the bar when I had to go to the bathroom.

Others shined a spotlight on the sheer stress that comes from protecting yourself from predatory men. For instance, author Jessica Shortall stressed how she had to carefully book an Airbnb for a work trip. If men had a 9pm curfew, she would be able to pick a place to stay wherever she wanted.

Thinking about this made me realize how un-free I am. The threat of violence because of my gender is something so normal I've stopped imagining different kinds of freedom. https://t.co/yfqTDgbkLZ

While Muscato stressed that the responses from women were relatively similar to those in 2017, she noticed one major difference: Men were much more receptive this time around. She thinks #MeToo has changed the way men think about women’s experiences in the world, and as a result, men are more likely to listen to women when they open up about their experiences with sexual harassment or rape culture. Case in point, Muscato did not need to block any men on Twitter after making her tweet.

“Men are starting to realize that they need to listen to women/gender nonconforming people about this, because now there are consequences,” Muscato told The Daily Dot. “This time around, a lot more men showed an active interest in trying to understand and trying to actually address their privilege. I was so thrilled to see that.”