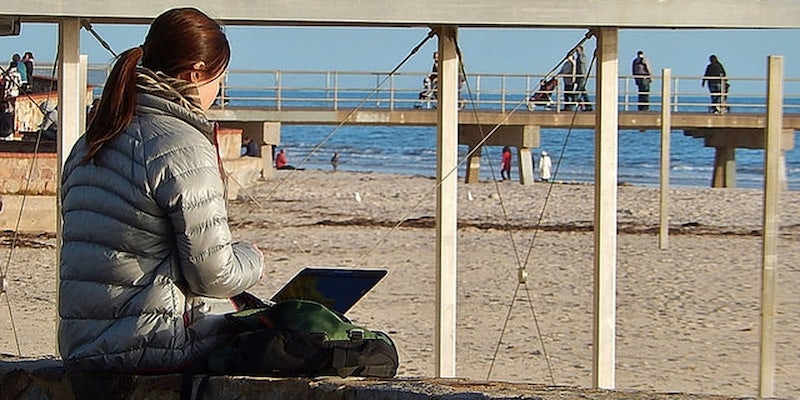 These are the ‘Women Against Feminism’

“Everybody’s voice deserves to be heard."

In recent weeks, the Women Against Feminism Tumblr has surged in popularity and stirred up debate. It’s where women anonymously share selfies explaining why they reject feminism, dislike feminists, or don’t think the movement is relevant anymore.

Wonder if those who say they are #WomenAgainstFeminism have ever thought about how their right to vote came about? #feminism

“These women may claim that they don’t need feminism, but the rest of us know we do,” Lillian Kalish wrote on RYOT. “I’ll politely add that I think these women are mistaken.”

But who are these women, and why do they reject feminism? Since all of the selfies are anonymous, it’s hard to really know anything about them, beyond what’s written on a piece of notebook paper.

While the Tumblr and trending hashtag may be relatively new, there have been women against feminism for years. For the most part, they fall into two camps: egalitarianism or anti-feminism.

Anti-feminism may seem like something that went away with corsets and pearls in the kitchen, but it’s a movement that’s alive and well. In the past, it largely meant men and women who didn’t support the suffragette movement. According to freelance blogger Julie Klose, that doesn’t represent what anti-feminism is now. 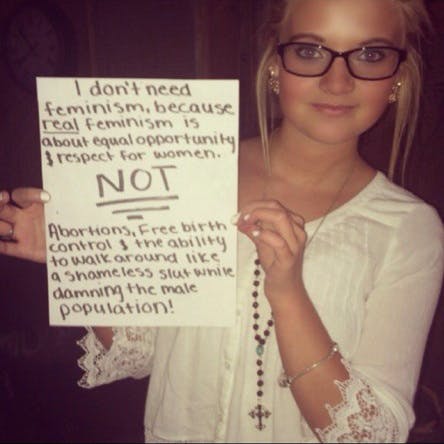 Klose told the Daily Dot that people like her include religious women, pro-lifers, and those who are more politically conservative. She said feminism has become more about special interests and less about the women’s cause as a whole. One of the big issues: women want to be stay-at-home mothers without being judged, or have the option to be once they’re older.

“I think the majority of feminists, even staunch feminists, do think it’s OK for women to have the option or the choice to stay at home,” Klose said. “But they’re certainly not talking about it, and they’re certainly not praising it. [Stay-at-home mothers] feel the negativity about it, and they’re looked down upon for choosing family over career.”

I embrace what makes me different from men. Being different isn’t the same as being lower or less important than men. #WomenAgainstFeminism

There are others who say modern feminism stops men from being chivalrous and encourages women to reject their own femininity. According to Honey Badger Brigade founder Alison Tieman, this comes from the fact that anti-feminism is largely rooted in more traditional, conservative values.

“There’s some people who oppose feminism because they think men and women should have distinct roles,” Tieman told the Daily Dot. “I’m not in that camp.”

Tieman calls herself an egalitarian, which doesn’t have much in common with anti-feminism beyond a mutual dislike for third-wave feminism. In fact, Tieman doesn’t like being called an anti-feminist. She prefers “non-feminist.” Tieman said egalitarians advocate for total equality between the sexes. It’s a term that’s been around since the turn of the century, but has sprouted new legs in recent years.

Do you believe in equality for all human beings? Congrats! You’re an Egalitarian. Big picture, people. #womenagainstfeminism

According to Janet Bloomfield, blogger for Judgy Bitch, many egalitarians are more in favor of recent feminist platforms, like Roe v. Wade, which she considers the “greatest feminist achievement.” But she said feminism no longer helps women and the movement needs to become more about total equality.

“If feminism is a political, active movement to give women legal rights that made them equal to men, it’s done,” Bloomfield said in an interview. “We’ve achieved that. In fact, we have more rights than men right now.” 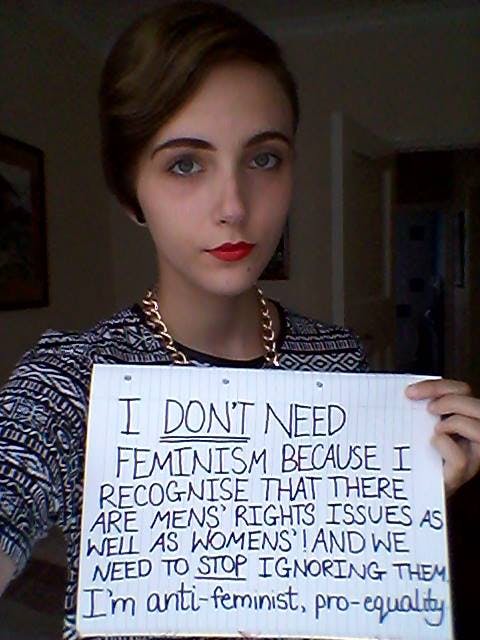 That’s where the men’s rights movement comes into play. Quite a few egalitarians, like Tieman, also call themselves men’s rights activists, or MRAs. The movement maintains that “feminist governance” has promoted a hatred of men and boys, portraying women as victims while denying that men can be victims too.

“I think men’s rights activism and men’s rights issues advocacy brings attention to the fact that men have vulnerabilities too,” Tieman said. “Challenging the narrative of female victimhood is going to lead to women being empowered and actually seeing themselves as moral actors in their own lives.”

There are controversies that surround the men’s rights movement, or at least factions of it. In 2012, the Southern Poverty Law Center called out some men’s rights groups as being hateful towards women, though Tieman said they never classified MRAs as a hate group.

One theory that’s circulated is that  Women Against Feminism wasn’t actually started by women, but a group of male MRAs using women to push their own agenda. Bloomfield said she knows the woman who started Women Against Feminism, and that she’s remained anonymous because she’s afraid for her safety.

“She’s received so many threats of violence, and saying people are going to destroy her life and get her fired from her job,” she said. 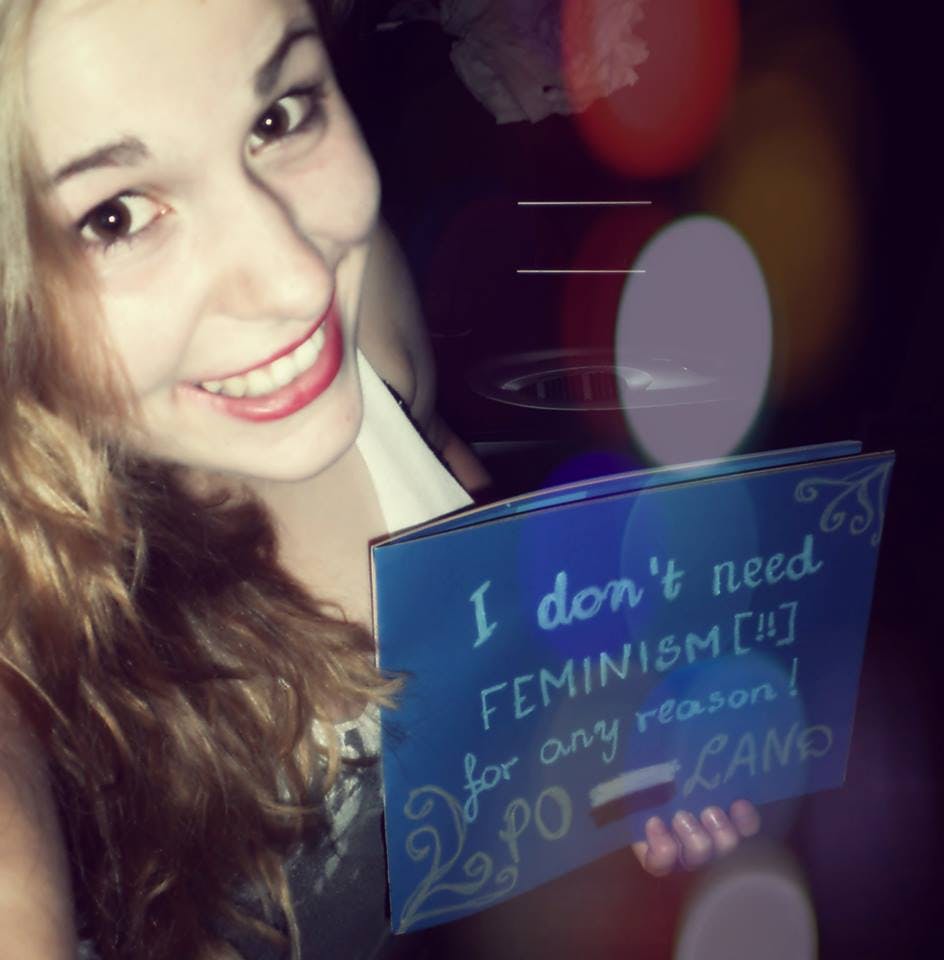 According to Bloomfield, Women Against Feminism really took off around the recent Hobby Lobby decision. Many egalitarians and anti-feminists were on different sides in terms of the decision. Bloomfield supports including birth control in health coverage, but these women say feminists’ responses to the decision didn’t help their cause.

“Prominent media feminists came out and described it as a war on women,” Bloomfield said. “It just made feminism come off as spoiled and trivial and privileged and whiny. It was a very big strategic mistake, and feminists kind of shot themselves in the foot.”

Women Against Feminism may have grown in popularity when the Supreme Court declared corporations could have religious rights, but women have been rejecting the feminist movement since it began. They might  prefer a theory they feel is more inclusive for both sexes. Kristal Garcia, who calls herself an anti-feminist, egalitarian, and MRA, recently expressed this in an interview.

“Of course I’m in favor of women’s rights,” she said. “Why would I be against that? The focus is working together as people, and feminism is not doing that.

“Everybody’s voice deserves to be heard.”