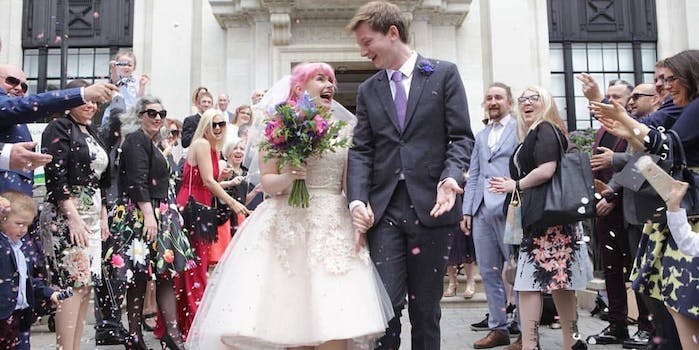 Woman tweets at bookstore crush, finds happily ever after

Nothing sends the heart aflutter like a little (uncreepy) flattery on social media. But the sparks really flew when a U.K. woman tweeted out her fondness for the mind behind her local bookstore‘s Twitter handle.

well I'm in love with whoever is manning the @WstonesOxfordSt account. Be still my actual beating heart.

Yes, Victoria Carlin, a former circus performer, was first charmed by, none other than, a tweet about Pokémon (and this was in 2012).

#bookfacts While there are now millions of books, the first 150 were obviously the best. No, wait..that's Pokemon. #pokemonfacts

When the man behind the tweet replied, their banter escalated into the cutest Twitter flirting we’ve ever seen. 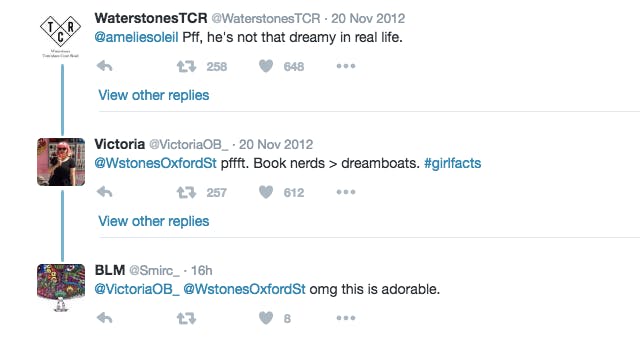 However, despite the obvious chemistry, a couple weeks of radio silence followed.

As it turns out, Carlin wasn’t the only one smitten with the man behind the Twitter.

@kittydevine123 @wstonesoxfordst I've already tried. He didn't fall for my charm and BANTER. DEVO'd. We have taken gin tea in bloomsbury…

But just when Carlin thought all hope was lost, her dream man revealed himself.

@JonathanOB_ No, we haven't. I was going to suggest it if you ever replied. Now, however…

Jonathan O’Brien, the book nerd who stole Carlin’s heart, told Mashable that their online exchanges soon turned into a real-life encounter: “One day, Victoria came into the shop with donuts, I ate them (giving away a very cavalier attitude to food from strangers).”

The two went for a walk during O’Brien’s lunch break, and later to a secret cocktail bar for drinks.

O’Brien recalled, “It was easily the best first date I’ve ever been on (and hopefully the last first date I’ll ever go on). I brought a book of The Wizard of Oz as a present because Victoria had mentioned to me how much she loves the film.”

On Sunday, the two were married at Islington Town Hall in London.

And there was even a special guest appearance at the wedding.

Caught a Jynx while waiting for my wedding to start. pic.twitter.com/jjLz35ZvoL

The happy newlyweds are still very active on Twitter, and they’re amused at how their story has taken off.