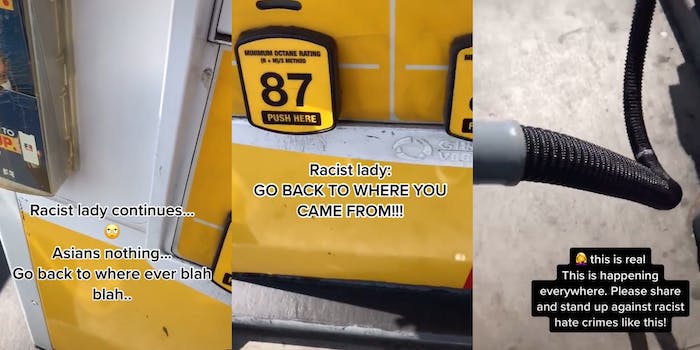 'Absolutely no reason to have this much hate.'

One woman’s encounter at a gas station is going viral on TikTok as people start to reckon with the anti-Asian racism and violence that’s been sweeping the United States in the past year.

Jenny Park shared the video that her friend, Stella, took while filling her car up with gas in recent days.

The footage opens with a woman who is never seen on screen demanding Stella “bow” to her “or you will go back to fucking where you came from.”

“Oh, you refuse?” the woman asks as Stella remains silent. “Go back to where you came from! You get nothing.”

For the duration of the video, Stella does not respond or do anything other than continue to fill her car up with gas, but the woman isn’t deterred from her rant.

“Why would Jesus Christ give anyone the power, who acts like that? Entitlement, selfish, greedy,” she says. “You’re just Asian. You’re Asian. Go back to your Asia.”

Commenters on the video were infuriated on Stella’s behalf.

“Absolutely no reason to have this much hate towards someone who is minding their business,” wrote user @ughjazzy_d.

One user suggested that “sometimes violence is the answer,” while another promised to “make sure to intervene if [he sees] anything like this.”

Anti-Asian hate crimes in the U.S. were up roughly 150% last year, with many pointing to “China Virus” and “Kung Flu” rhetoric often used by former President Donald Trump and other Republican politicians to place the blame on China for COVID-19 as a driving reason.