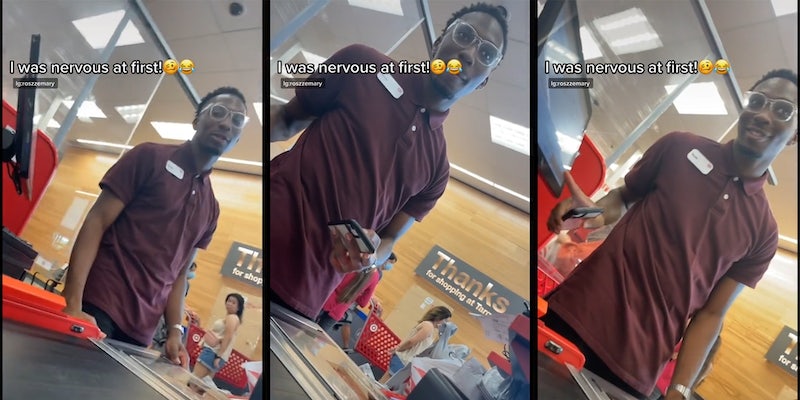 'Ladies sometimes all you gotta do is initiate a lil.'

A TikToker by the name of Rosemary (@rozzzemary) uploaded a video of her interaction with a cashier she asked out on a date in what was presumably their first interaction. She recorded the intimate moment, which sparked a litany of different reactions from other users on the platform.

The video begins with a shot of a bottle of Strawberry Fanta on a checkout counter with a text overlay that reads, “I was nervous at first!”

A voice off-camera, presumably Rosemary’s, asks, “Hey how are you?” The cashier responds in kind. The TikToker says, “I’m good. You’re so cute.” It sounds like the employee tells her that she’s cute too.

She then asks if he has a girlfriend, to which he replies “No I’m single, what about you?”

The cashier then asks for her phone number and begins to pull out his cell phone. “For real?” she asks before giving him her number, which is cut out of the clip. He tells her it was nice to meet her before she asks if he knows any “nice places to hang out.”

The worker then asks her what “she’s trying to do” in the area and the two exchange pleasantries. He smiles before the video ends.

The Institute for Family Studies conducted surveys on whether men or women are more likely to “make the first move” in pursuing a relationship, and discovered that in heterosexual relationships, “Men are much more likely than women to say they asked for the first date, regardless of the couple’s relationship status.”

IFS research also indicated that men who first popped the question were ultimately happier with their relationships. 70% of those who said that they approached a woman they were interested in first were content with their significant other, while only 46% of those who were first asked out on a date by a woman said they were happy.

Some women have stated that they ultimately felt better about themselves and their relationships when they decided to stop pursuing men, while others have encouraged women to be more forthcoming when it comes to pursuing men they’re romantically interested in. There are also psychological studies about the evolution of relationship dynamics that are so granular, that some may argue that they remove the “magic” of having feelings for somebody altogether.

Rosemary’s post sparked a litany of different reactions, most of them in support of the TikToker’s straightforwardness. Some folks praised her ability to outright ask the man out on a date. Others mentioned that they would be much too shy to ask.

“SLAYYY i aspire to be this confident in flirting,” one user wrote.

“My anxiety could never,” another said.

“Shiiii not me…. I would be like ‘sooo what you doing here… oh working…right right….*sees name tag* what’s your name,” a third added.

Still, one viewer said Rosemary’s nerves were obvious in the video. “I could tell you nervous. What you doin putting that one soda bottle on the conveyor belt ??” they asked.

Several users praised the respect the man showed to Rosemary during their interaction.

“AND WHEN HE SUGGESTED A PUBLIC AREA AND NOT JUST ‘HIS PLACE’ AAAAAAHHH,” one viewer commented.

“What a gentleman!!!” a second shared.

“I loved this exchange. he asked for her number knowing she was interested !!” a third wrote.

Others said it was clear how the TikToker showing interest in the cashier gave him the confidence to make a move.

“See how confident he got,” one user noted.

“I know bro felt amazing for the rest of his shift,” another claimed.

“Ladies sometimes all you gotta do is initiate a lil and we got it from there (speaking as a shy guy),” a further user argued.

There were some users, however, who argued that this kind of approach does not work both ways, and that when men approach women for a date while they’re at work, they’re vilified. This started a debate on relationship and dating dynamics in the comments.

“It’s much easier for girls. We don’t treat y’all like you’re bothering us,” one TikToker claimed.

“Y’all say stuff like this then post on social media…: he didn’t try hard enough,” another seconded.

“Bro hes working. add that to the fact women say not to approach them, so why would he try anything,” a third argued.

Update 7:07am CT, Sept. 20: Rosemary told the Daily Dot that she was inspired to record her interaction with the man because she believed she would “get a response/reaction regardless.”

“The worst thing that could happen is to get a ‘no’ for an answer, and most of the time, it is either because they have a partner or they aren’t just feeling you,” she added.

She confirmed the two ended up going on a date.