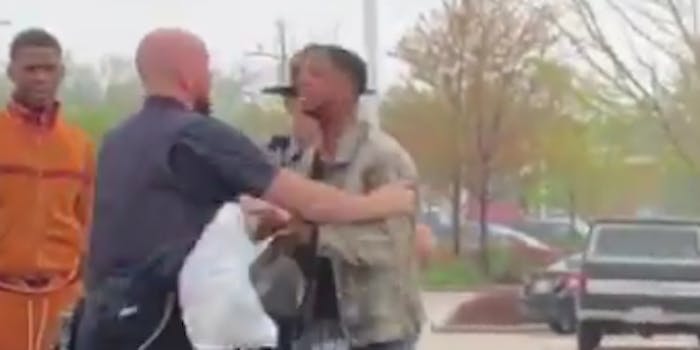 A Wisconsin cop appears to punch Black teen in the face, and it was caught on video

The teen was being restrained at the time.

A police officer in Wauwatosa, Wisconsin was captured on video by a bystander on Friday apparently punching a black teenager in the face while a security guard held him back. While the video doesn’t show what led up to the violent encounter, the teen reportedly was struck in the face by the officer twice and gripped by the back of the neck after he was thrown to the ground.

The incident took place in a mall parking lot, and according to local NBC affiliate WAFF, the man who filmed it says that he “knew it was wrong” as he saw the incident unfold. The man, Tyrone Jackson, was exiting the Mayfair Mall when he saw the police grappling with the anonymous 17-year-old, and he pulled out his phone to film what was happening.

#BREAKING video appears to show a @WauwatosaPD officer punch someone in the face in the Mayfair mall parking lot. Tosa PD says they were called to the mall for disorderly subjects who refused to leave. Hear from the man who recorded the incident tonight on @WISN12News at 10 pic.twitter.com/pGnKtWZea3

“When the officer got out of the car I said ‘Stop,’ and got in front of the young man, and next thing you know he’s like, ‘Let me go!’” Jackson told WAFF. “I knew it was wrong, that punch was wrong… If it was just a tussling, trying to get him down, OK that would be something different. But the punch to the face, twice, to a minor, it was something serious to me.”

The police reportedly claim that prior to the video, the teen began physically confronting the officer. As WAFF noted, Wauwatosa Police Captain Brian Weber released a statement insisting that the incident would be reviewed.

“I can assure you that we take all situations seriously when they involve a use of force by our officers. We thoroughly review all incidents in which force is used by an officer and will do so in this incident, as well,” Weber said.

The teen was arrested and charged with battery, disorderly conduct, and resisting an officer.