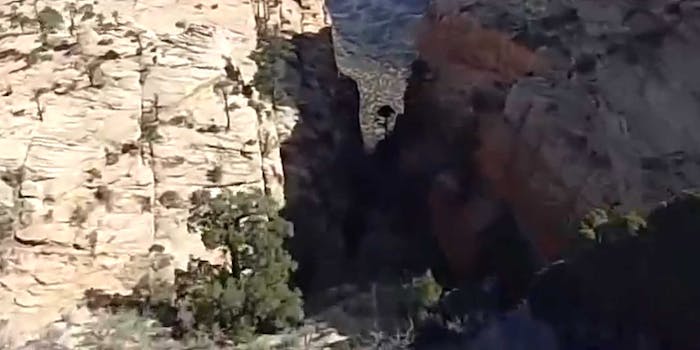 Strap in for a death-defying wingsuit jump

This is what being James Bond must feel like.

In an age where we can strap high-end cameras onto our craziest daredevils and thrill-seekers, a bracing adrenaline boost is only ever a click away. Case in point: this white-knuckle wingsuit ride through a perilous rock formation in Utah’s Great Basin National Park, undertaken by professional BASE jumper Robert Morgan, more widely known as Scotty-Bob.

Leaping from a cliff, Scotty-Bob pulls out of freefall by means of his special jumpsuit, which increases one’s surface area for additional lift and, with its giant flaps, tends to make the wearer resemble a bat or flying squirrel. They allow jumpers to fly for a few minutes before deploying their parachutes. “Just a bunch a dudes, tryin’ to be birds,” the YouTube description reads.

He then has to navigate the dangerous Beehive Line, a canyon some 300 yards long but sometimes as narrow as 15 feet wide, at speeds approaching 160 miles per hour. At moments it feels as if you can reach out and touch the craggy stone on either side, but Scotty-Bob isn’t rattled and emerges on the other side with a hearty cheer.