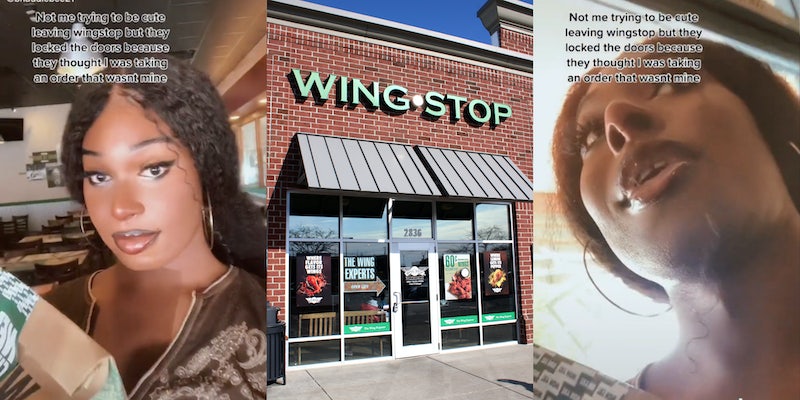 ‘They locked the doors’: Customer says Wingstop locked her in over order

A TikToker claims that somebody at Wingstop attempted to lock her in because they thought she was stealing someone’s food.

In the clip, Bee holds a Wingstop bag and records a video of herself as she attempts to leave. When she reaches the door, however, she notices that it won’t open.

The text overlay on the screen of the TikTok reads: “Not me trying to be cute leaving Wingstop but they locked the doors because they thought I was taking an order that wasn’t mine.”

The video ends abruptly, so it’s not clear how Wingstop and Bee sorted out who the food belonged to. In a comment under her video, however, Bee joked that she was “shocked and embarrassed.”

But, somewhat surprisingly, Bee reportedly isn’t the only one to deal with this type of situation at Wingstop. Several other commenters reported both long wait times at the restaurant and similar accusations that they were trying to take someone else’s order.

The top comment on Bee’s video, with over 5,000 likes, reads: “One time I waited over an hour for my online order at [Wingstop] and this [white man] tried to stop me to see if my order was his. I just kept walking.”

Another user reported a similar experience. “After they didn’t think my card was mine even after ID, I stopped going to Wingstop,” the TikToker wrote.

“No cuz my [boyfriend] ordered wingstop online one time and they were SO WEIRD [about] it like they encounter tons of Wingstop bandits,” reads a third comment.

Even if Wingstop theft is common, other TikTokers pointed out that it’s weird—and potentially illegal—for the chain to lock customers inside, as it did with Bee.

“I smell a lawsuit coming for this Wingstop,” reads one comment.

“Why didn’t they ask you instead of doing all that? Wingstop is weird,” said another user.

The Daily Dot has reached out to Bee via TikTok and Wingstop via email.