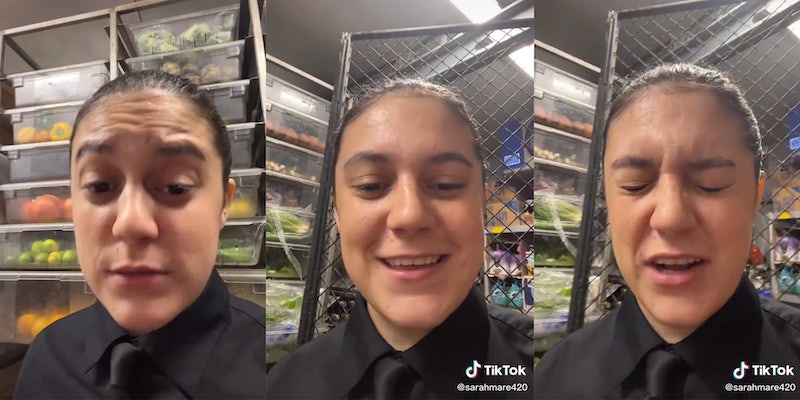 ‘That’s not really an outlandish request’: Server complains about customer who asked for wine bottle to be kept in freezer after AC breaks, sparking debate

'Guests come in thinking that they are the only people to f*cking exist in the entire world.'

In a viral TikTok, a server claims a customer made her go back and forth to the freezer to chill her wine bottle when the air conditioner at the restaurant went out, sparking debate about the expectations customers place on restaurant service workers and whether the request was unreasonable.

The viral video, which has over 790,000 views and was posted earlier in the week by TikToker Sarah (@sarahmare420), shows the server filming herself in the freezer at her restaurant, speaking about an experience she allegedly had with a customer.

“My table just sat down and was like, ‘Ooh, is y’all’s AC out?’ And I was like, ‘Yes, ma’am, I’m dripping in sweat as we speak.’ And she’s like, ‘Can we move?’ And I said, ‘I don’t think it’s gonna change where you are in the restaurant.’ Then she proceeds to tell me to put her wine bottle that she just ordered in the freezer for her, and every time she needs more to come get it out of the fucking freezer and bring it to her. I said, ‘Yes, ma’am of course! Yes ma’am!’” the server says in the video.

“I need a new job immediately,” the server captioned the video.

I need a new job immediately

Viewers in the comments section debated the customer’s alleged request, with many sympathizing with the server.

“I hope she tipped you,” another supported.

In a video response on TikTok, the server responds to these encouraging comments, saying: “I can’t even lie, that lady did tip me $30 on a $70 but, like, no amount of money will make me forgive you for that. I will remember that for the rest of my life.”

Others in the comments section argued the fault lied with restaurant management for staying open despite having a broken air conditioner.

“The restaurant should have closed tbh,” one user argued.

“Be annoyed with the owner,” another replied.

In a further video response, the server responded to comments about her restaurant’s owners saying: “Idk the owner lmao its a multi billion dollar chain restaurant.”

Other viewers questioned the server’s actions, saying the request from the customer was not out of line.

“Ok but if the ac is out that’s not really an outlandish request,” one user debated.

“Girl, she was looking out for you… giving you a reason and a chance to cool off,” another argued.

“Its that hard for you to walk to the back? Wrong profession. Wants to do bare minimum and expect to get paid,” a third criticized.

In a series of video replies, the server responds to these comments, saying she found it ironic a customer was complaining about having to deal with the hot conditions in the restaurant while also asking another person to run around an additional amount in the heat. She also says the bottle was only $20 and was even brought out in a cooler, making the request more unreasonable.

“This mindset is fucked. Like, this is why we get treated like shit. Because guests come in thinking that they are the only people to fucking exist in the entire world. Little do you know, I have 20 other people that I’m worrying about that are thinking the same exact thing you are. … This is why the customer service industry sucks. Because your business is not the only business that fucking matters,” the server says in another video.

The Daily Dot reached out to Sarah via TikTok comment.