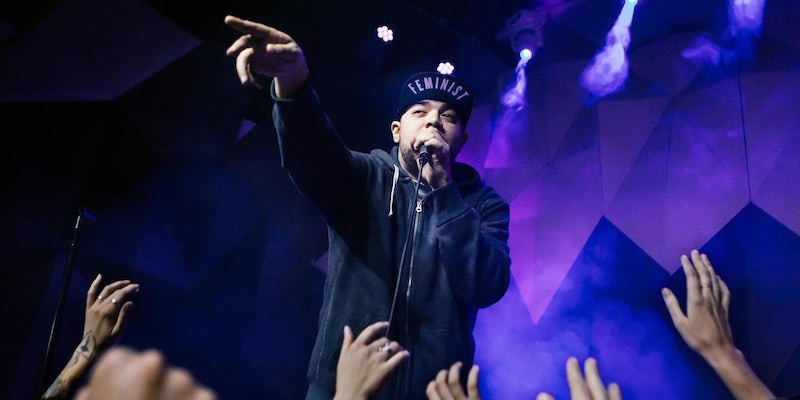 Photo by Jules Davies for Wildfang

International Women’s Day raises an important question: What does a feminist look like in 2016?

With a new photo series titled The F-Word, tomboy fashion line Wildfang tackles lingering stereotypes about feminism with portraits of self-identified feminists who don’t always fit the mold. The subjects aren’t modeling the line’s clothing: In fact, the project isn’t even being used as an ad campaign. It’s simply a statement that the company’s two female owners, Emma McIlroy and Julia Parsley, felt was increasingly necessary as they grew frustrated by what they describe as a sexist political climate.

“We’ve recently watched a misogynist race to the front of the Republican party nominations,” McIlroy told the Daily Dot. “We’ve watched women’s healthcare be restricted in numerous states like Louisiana and Texas, we watch as women make up 51 percent of the population yet just 20 percent of Congress. And you’ll find more CEOs named John than there are female CEOs, period. There’s only so long you can watch all that and not be frustrated.”

To celebrate Women’s History Month, Wildfang designed a T-shirt with the phrase “Wild Feminist” emblazoned across the chest. But it’s the disparate personalities in the company’s new portrait series that really challenge the concept of what a feminist looks like. From a male, Republican big-game hunter to a beauty queen and a pair of strippers getting dolled up for work, the photos defy stereotypes. The Daily Dot spoke with two of the people featured: Fatmah Worfeley and Elle Stanger. Worfeley, a Muslim activist who identifies as Afro-Arab, was photographed wearing her hijab—an article of clothing so contentious in Western culture that she said she’s been told it’s not possible for her to be a feminist because of it. Stanger, who balances a busy life as a stripper, mom, and freelance writer, has also been told she can’t identify as a feminist—for reasons that have more to do with the clothes she is not wearing. Stanger, who was photographed in the dressing room of Portland, Oregon’s Kit Kat Club alongside fellow dancer Kenna, said that she just as frequently hears comments about feminists being “ugly” as anything directed at her personally. She emphasized the role of consent in sex work. “I provide access to my time and body in exchange for money. I am a gatekeeper for this access, and my clients do not receive service if they do not respect me or my boundaries,” Stanger said.

“People are raised to denigrate female sexuality, rather than appreciate it,” said Stanger of people who might think that being a sex worker and a feminist are necessarily separate identities. “Our culture is overwhelmingly hypocritical about how obsessed and possessed we are regarding sex.” 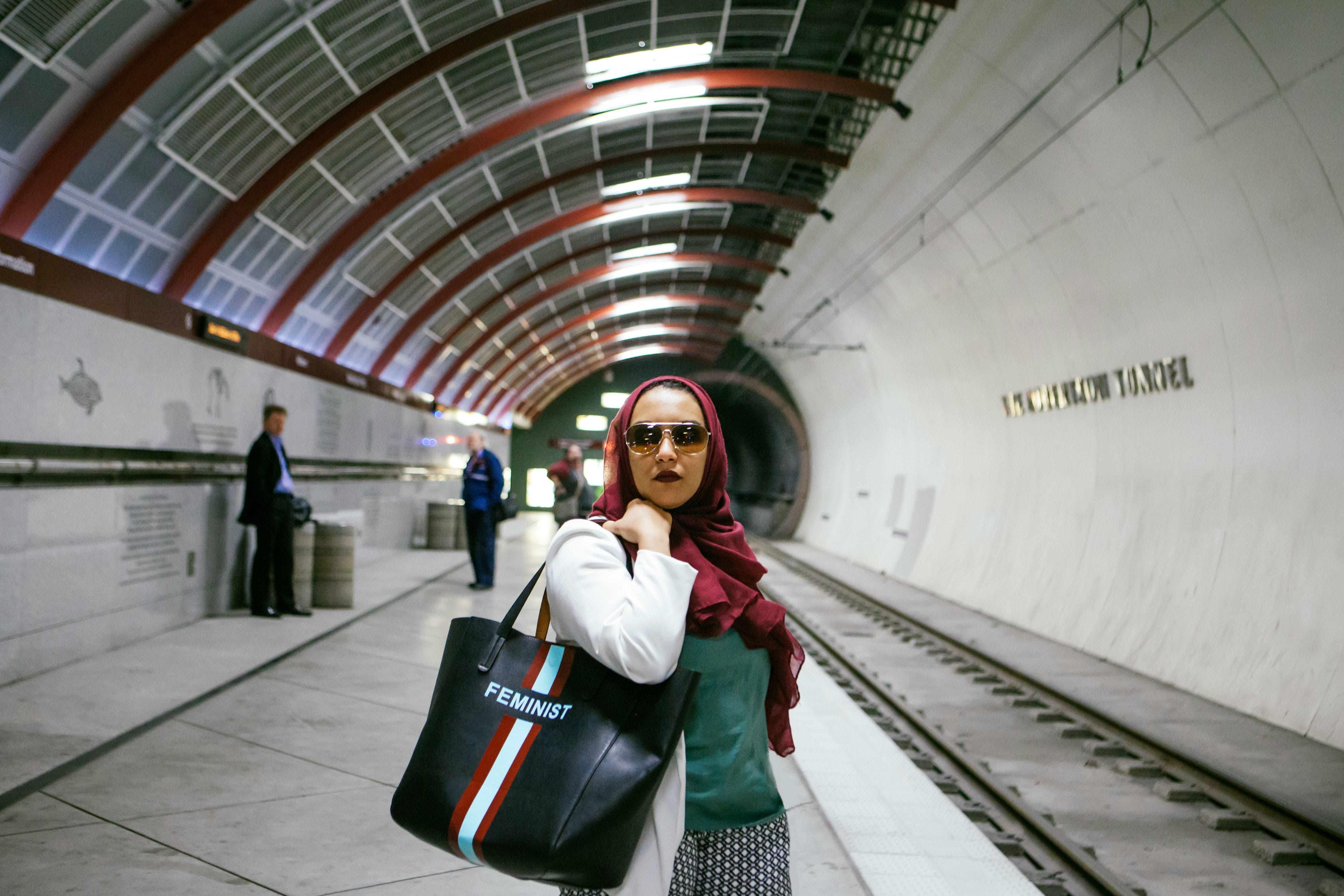 Worfeley, also a Portlander, was shot in a subway station waiting for the train—hijab in place and bag slung over her shoulder with the word “Feminist” stamped in large letters.

“I’ve been in numerous situations where I’ve been stopped and told ‘you’re not a feminist,'” Worfeley told the Daily Dot. “In these situations when someone is confused, or clearly states I’m not, I usually ask them ‘how do you know?’ and if there is no answer, I obviously then go further to explain that I am [a feminist] because I am a free human being. I choose what I do, and I take full responsibility for what I do.” Other self-identified feminists featured in the series include Ace, a “Samoan family man” with his ideals tattooed prominently across his chest; a rapper named Goldini who wears a “Feminist” hat onstage; and a 12-year-old girl named Leah who calls herself a “biologist/activist in the making.” 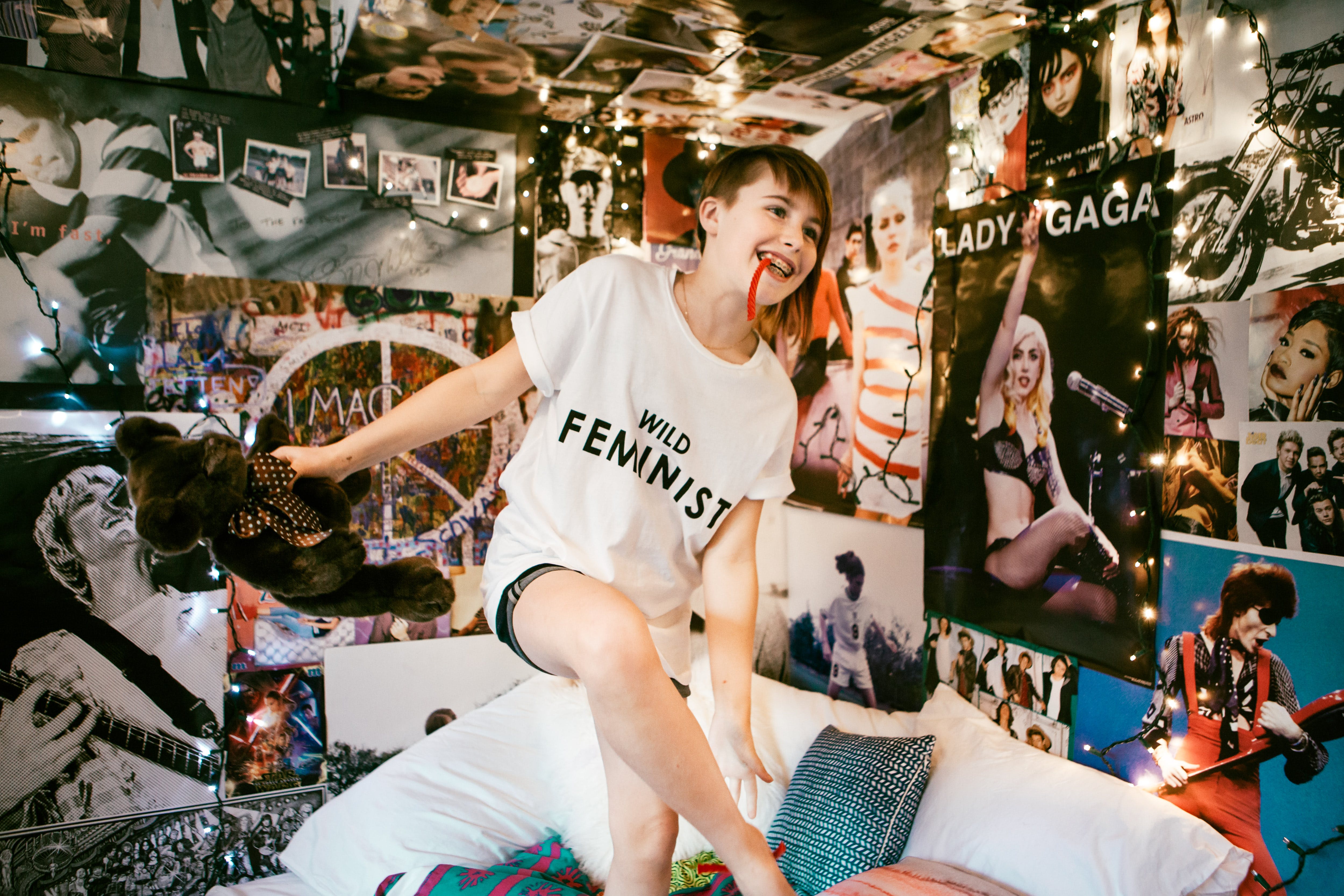 “Some people think young girls can’t have opinions or be activists,” said Leah in a statement paired with her portrait. “I am a feminist because I believe gender does not matter, we should all be equals. We are all humans; living, using, and relying on this earth.”

Photo by Jules Davies for Wildfang