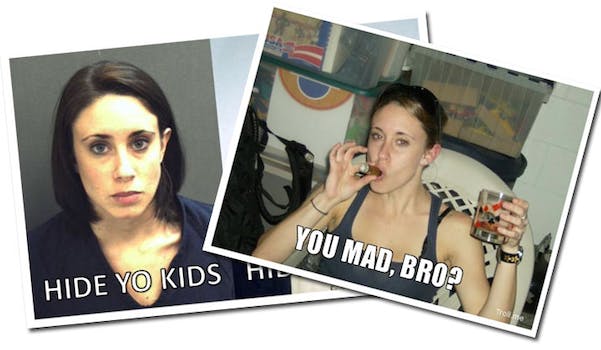 Why we all went loco for LOLCaseys

The Internet is working to one-up itself in a game of inappropriateness, using Casey Anthony as its canvas. By attempting to meme-ify her, has society hit a new low? Or, is this simply a case of Lolcats gone LolCaseys?

The Internet is working to one-up itself in a game of inappropriateness, using Casey Anthony as its canvas. By attempting to meme-ify her, has society hit a new low? Or, is this simply a case of Lolcats gone LolCaseys?

This video image macro of Casey Anthony is just one of many making the rounds on the Internet. Image macros, a photo with text superimposed, is a meme form, a meme being a funny or ridiculous cultural nugget taken out of context which spreads virally. But like the trial, these image macros of Casey Anthony are more disturbing than chuckle-worthy.

Memegenerator.net, a meme generating template site, has already been used to create more than 500 of these image macros – most of which utilize the picture of Casey Anthony smoking a cigar with a drink in the opposite hand.

Casey Anthony meme-ification shouldn’t be surprising given both traditional and new media’s fascination with her trial. But, it seems this meme doesn’t feel as natural as some, rather, this meme feels a bit forced.

If the schadenfreude didn’t give you an icky feeling already, a thread was created on Internet meme database “Know Your Meme” titled, “someone needs to make a casey anthony meme” before the actual entry.

Why? Because it didn’t already exist.

Know Your Meme’s page on the trial was created yesterday, but as one smart commenter Pseudogenesis noted on the site: “I’d say deadpool out of courtesy. Plus, this is a popular event, not a meme. A few image macros do not a meme make.” (Deadpool is Know Your Meme lingo for a rejected meme entry submitted to the site)

The majority of these Casey Anthony image macros being passed about on social media networks rely heavily on other well established memes: see  Antoine Dodson, Charlie Sheen, Pedobear, the professor from the show Futurama, Rage faces made popular through Reddit’s Rage Comics, and even Bill O’Reilly. This use of other meme text makes sense as there is little inherent comedy in the Casey Anthony trial, and furthers the idea that Casey Anthony is not a meme in and of herself.

Have we become so dark a society that we can laugh at the death of a child? Or is this just a form of digital catharsis? A shaming at the public stocks gone digital.

In a reddit post titled “To Everyone Freaking Out About the Casey Anthony Verdict” — itself referencing the now infamous photo of Casey Anthony smoking a cigar — lie_some_more writes:

“The publicity of the case serves the purpose of alienating her from most everyone who watches the case. Possibly her family, too. I don’t know about you. But I think that’s some kind of retribution.”

ShowTime’s “Dexter” — a drama about a sympathetic serial killer who only snuffs out “bad people” — is an unlikely hero but, in a way, exemplifies the same anti-heroic call for retribution and justice. Extremely inappropriate, but still somehow satisfying.

The meme-ification of Casey Anthony is, in the end, just a 21st century coping mechanism; a collective cultural expression of grief, rage, or frustration at our judicial system.

Perhaps the forced Casey Anthony meme will blossom into the ultimate meta-meme highlighting the Internets inappropriateness?