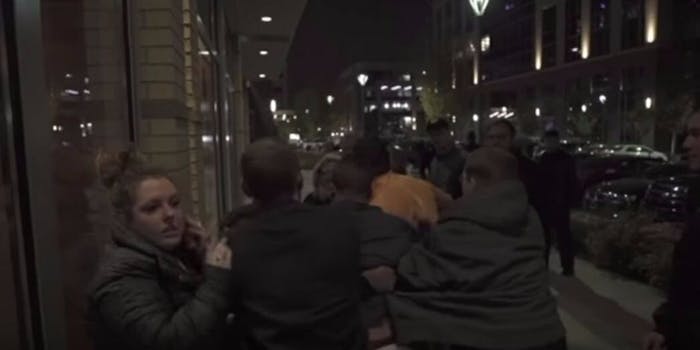 Screengrab via Colton of Yore/YouTube

'How does White Lives Matter punch me, a white woman, in the face?'

When white supremacists marched in Shelbyville, Tennessee, on Saturday, they were apparently so out-numbered by counter-protesters that a second rally, scheduled for Murfreesboro, was canceled. However, the group proclaiming White Lives Matter still allegedly made its mark in a Nashville suburb that night.

The Tennessean reports that police are investigating a fight that broke out in a pub in Brentwood between a large group of white supremacists and an interracial couple.

And it was caught on video.

According to a Nashville Police news release, 20-30 white men and women entered the Corner Pub and approached a white woman and Black man sitting at a table together. The white nationalists allegedly told the woman to leave her boyfriend, and, according to police, “the argument inside apparently escalated even after the female victim had gone outside to de-escalate the situation. After another woman in the group reportedly began to argue with the victim, a man allegedly struck her in the face with his fist, causing a cut above her eye. She refused medical treatment.”

Police say the suspect who hit her is a white man in his 30s, and he was wearing a black jacket and black jeans. The female victim said the group of suspects left the scene in multiple vehicles with Wisconsin and New York license plates.

Just got off the phone with white nationalist leader Matthew Heimbach—here's a rough transcript of our quick chat about the fight in TN: pic.twitter.com/wg0W7Hnn8U

The victim, however, sent a message to Fox 17, saying, “We are truly saddened by this event. It’s 2017 and its crazy racism exist on a major scale still! How does ‘whitelivesmatter’ punch me ‘a white woman,’ in the face? What do these people stand for and how are they aloud [sic] to still assemble and protest?”

She went on to say that she was shocked the bar would even serve these men who attacked her. “This business allowed them to enter and leave going to there car to get who knows what. I was terrified and still am,” she said.