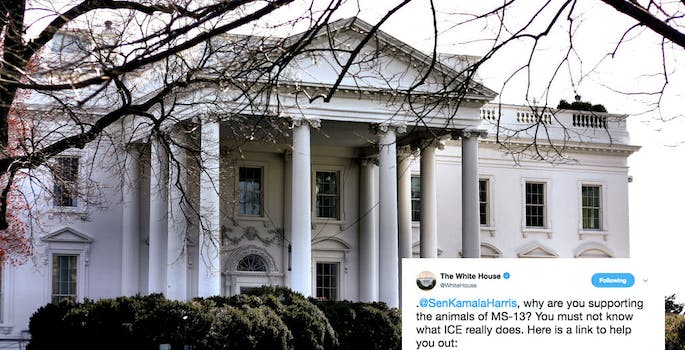 On Monday, the Department of Homeland Security announced on Twitter it was going to share stories from some its departments to highlight the work happening on immigration amid fierce liberal backlash, especially against Immigration and Customs Enforcement (ICE).

The message was retweeted by the president.

Today, DHS, @CBP, and @ICEgov will be sharing stories of the brave men and women who put their lives on the line every day with the sole objective of protecting our nation. Make sure to follow to see stories that have not been widely reported.

The tweets were exactly what you’d expect, praising the agencies for their work on crime and border security.

ICE has taken an active role to combat the #opioid crisis. In 2017, HSI seized nearly 2,400 lbs of fentanyl. Investigating, disrupting & dismantling transnational criminal orgs that illegally bring dangerous opioids into the US is 1 of ICE's top missions https://t.co/mx5NstBGon pic.twitter.com/y0SRF5BQqV

What wasn’t mentioned was that the official White House Twitter account would join in by attacking Democrats who’d spoken out against ICE. Both Sen. Elizabeth Warren (D-Mass.) and Sen. Kamala Harris (D-Calif.) found themselves on the receiving end of some White House scorn.

.@SenKamalaHarris, why are you supporting the animals of MS-13? You must not know what ICE really does. Here is a link to help you out: https://t.co/kcrNj4aVMU

.@SenWarren, why are you supporting criminals moving weapons, drugs, and victims across our nation’s borders? You must not know what ICE really does. Here is a link to help you out: https://t.co/5CiTKkIs4c

That the White House Twitter account—which typically tweets out anodyne presidential proclamations and news—would join into the partisan debate was surprising.

Wtf. Really…this is official White House communication? Who let trump on your twitter…but seriously, this tweet is totally inappropriate coming from our government. Kamala May annoy the hell out of me but at least she cares about people. You make me sick.

The Trump administration is now using the official White House account to attack a U.S. Senator?! And by singling out Kamala Harris, the Trumps continue their track record of publicly attacking prominent women of color. Reprehensible. https://t.co/k3GOAX0upx

This is so disgusting.

The White House is dehumanizing people and making it sound like everyone south of the border is an "animal" and a member of "MS-13".

We call on everyone, no matter what color or creed, to keep pushing back, to keep standing for families. https://t.co/xpvqD3wpwh

Over the past week, Democrats have started to publicly call for the abolishment of ICE, a position swelling within the left of the party. Harris said that the agency should “probably” start over, and Warren said it was time replace ICE with something that “reflects our morality.”

The president has already lashed out on Twitter over people calling for ICE to be abolished.