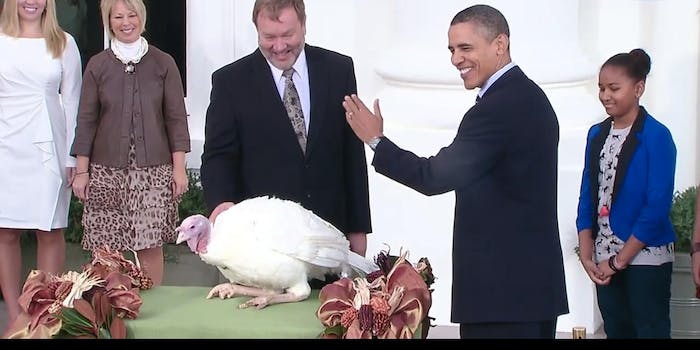 This year’s White House turkey pardoning is in your hands

Neither will die. Then both will die.

As former intelligence contractor Edward Snowden showed the world this summer, the U.S. government is very cozy with the Internet. So cozy, in fact, that the outcome of this year’s turkey pardoning has been put in the hands of Facebook and Twitter users.

On the Whitehouse.gov website, users can vote on one of the two social media platforms for which turkey will be officially pardoned by President Barack Obama this year.

The two contenders are Caramel and Popcorn. Their profiles, as well as their gobbles, are featured on the White House website. (In case you’re curious, Caramel is slightly bigger, has a “steady and deliberate” walk and loves Lady Gaga’s “Bad Romance.” Popcorn appears to be the underdog, smaller, with a “proud strut,” and a “more garbled” gobble.)

Since President Truman’s first Thanksgiving in office, presidents have been presented with turkeys. For years, they ate them. The exception was John F. Kennedy, who, only a few days before his assassination, decided to spare his bird.

The White House knows what you’re thinking: “So the losing turkey is going to die? That seems like a strange thing to vote for on the website of arguable the most powerful office in the history of the world.” No doubt aware of this concern, the White House site points out that “both turkeys will be pardoned, but only the American people will decide which bird takes the title.”

If only it were that simple. Unfortunately, no matter which of these pardoned birds you chose to support, both will likely die. As ABC reports, the birds are raised to be eaten and so, in the words of the farmer who tends to White House pardoned birds, “their flesh has grown so fast, and their heart and their bones and their other organs can’t catch up.”

Screengrab via The White House/Youtube