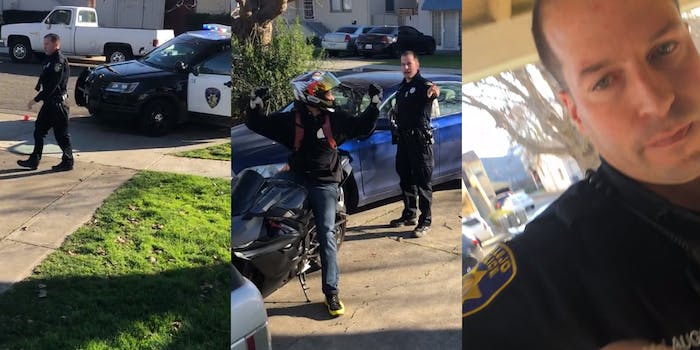 He says he suffered a concussion.

A Black veteran in Vallejo, California, says he suffered a concussion after a white police officer assaulted him on his front porch for filming a traffic stop in his driveway.

In the video, posted to Facebook on Thursday, 28-year-old Adrian Burrell begins filming as Officer David McLaughlin pulls over Burrell’s cousin dozens of feet away. He wrote in the post that he began recording when he saw the officer had “pulled his pistol” on his cousin. “My cousin was sitting on his motorcycle in front of my house,” he wrote. “A gun had been pulled on him because he ‘looked like someone’ the officer had seen speeding earlier. Obviously, the situation concerned me.”

In the video, when McLaughlin notices to Burrell on the porch, he says, “Get back!”

“No,” Burrell is heard saying from behind the camera.

At this point, McLaughlin tells the man in the driveway to “keep your hands where I can see them,” and rushes to Burrell, who is still on the porch.

“You’re interfering with me, my man?” McLaughlin says, and then a bit later, “Stop resisting.”

“I’m not resisting you,” Burrell says calmly and cooperatively. “Put me on the ground.”

“If you keep fighting, I will,” says McLaughlin.

“Stop fighting and get on the ground,” McLaughlin says before the video cuts out as it seems the device has hit the ground.

“Mclaughlin grabbed me, smashed my face against the wall and then swung my body, knocking my head into a wooden pillar causing a concussion,” Burrell wrote in the Facebook and Instagram posts. “He put handcuffs on my wrists so tight they broke the skin and caused my fingers to go numb.”

The Daily Dot reached out to Burrell for more details but has yet to hear back. Burrell, who identified himself as a former Marine, said the officer told him that if he wasn’t a vet, he’d be going to jail.

The SF Gate reports McLaughlin was sued for civil rights violations in 2014 after he and another officer pulled over a Black man without cause, held him at gunpoint, searched his car, and falsified a police report.

Vallejo police have since opened an investigation into McLaughlin’s incident with Burrell.