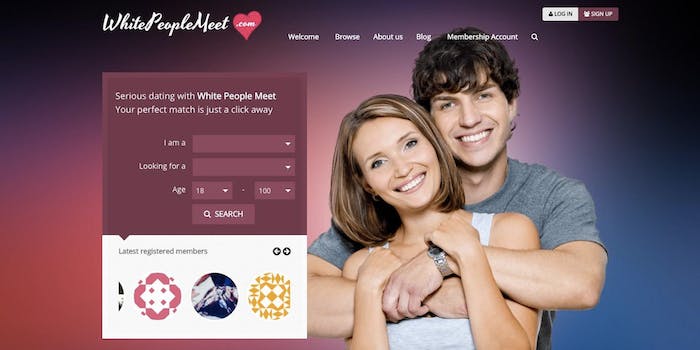 Dating site for white people gets roasted on Twitter

But lots of people are also joining.

Meeting people to date isn’t always the easiest. But luckily for white people, they might be able to meet their soulmate, thanks to the help of white people dating site Where White People Meet.

Since erecting a billboard advertising the website in West Valley City, Utah, the matchmaking site has seen an influx of both criticism and support. The site also looks to be headquartered in Utah, with its address being a North Salt Lake P.O. box on the contact page.Where White People Meet’s About page explains a little bit of its mission:

For those interested in joining, there’s a $4 membership fee. It’s heteronormative, with men only able to search for women and vice versa. But it appears to let these ivory-interested lovers get a little non-vanilla, with “married” profiles being able to search for another person for an extramarital rendezvous. And for those looking for possible suitors that share more than just their racist ideals, there’s groups you can join. It appears that the only one available at the moment is a group for hunting enthusiasts.

It’s unclear when exactly the site was started—its first blog post is dated June 20, 2013. But the billboard has only gone up recently, bringing attention to the dating site.

With all the publicity in the past couple of days, it looks like the site’s servers aren’t prepared for all the people trying to join or get more info about its services. The site’s Twitter has tweeted out several times in the past 48 hours that there’s been lots of traffic coming in.

Due to high traffic we are experiencing some downtime & issues with activation emails. Please be aware we are working to fix the problem.

Website users may be experiencing difficulty again today. Heavy traffic is overloading our server. We are working to resolve the issue.

You’re able to see new members on the website, with new people popping up every minute as of Saturday morning. But people have also taken to Twitter to express their concern about the site, pointing out the blatant racist ideology behind the site and the fact that there’s plenty of other websites and ways to meet white people, who are also the racial majority in Utah.

Tired of sites like OKC and https://t.co/bgwsL58B6r that cater almost exclusively to people of color?

Is EVERY OTHER DATING WEBSITE filled with white people simply not good enough?
Try #Wherewhitepeoplemeet

But that whole “WhereWhitePeopleMeet” dating site is another clear indication that many Whites don’t understand racism.

Others have also turned to humor to point out the ridiculousness of the site. Even former Utah resident Chrissy Teigen got in on the roasting.

@NYDailyNews thank god. i found it very difficult to find white people when I lived in Utah.

#wherewhitepeoplemeet: in deep cave ecosystems, where their lack of pigmentation is less of a handicap.

The Daily Dot has reached out to Where White People Meet for comment and will update if they get back to us. In the meantime, here’s some dinner suggestions for people trying to meet off this matchmaking website.