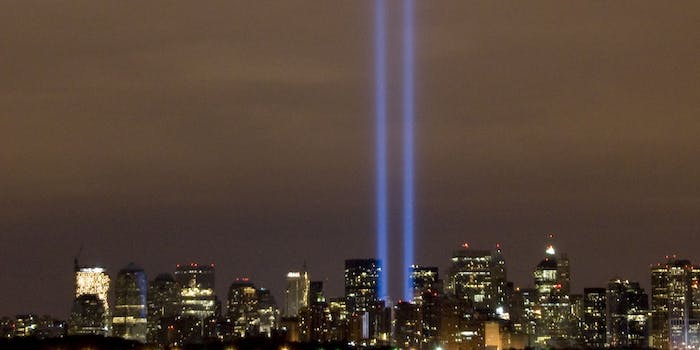 On Twitter, New Yorkers weave an oral history of 9/11

In 140 characters or less, users who were in New York City at the time summed up what they saw.

Twitter has found the perfect way to commemorate the communal horror of the September 11 attacks.

On the 12th anniversary of 9/11, the hashtag #wherewereyou—possibly a nod to the Alan Jackson song—trended in the U.S. In 140 characters or less, users who were in New York City at the time summed up what they saw, weaving an oral history of that day.

12 years ago today Sept 11th. We Will Never Forget. Still remember the smoke in the sky. Saying lots of prayers for families who lost lives.

at cafe in Chelsea, thinking at first it was an amateur plane like the one that hit the Empire State Building in the 20s #wherewereyou

#wherewereyou Working at 59th and Madison for Related. Could see straight down 5th to the towers. pic.twitter.com/F3A1L0l5Xn

#wherewereyou In the last subway train that left WTC that fateful day.

Confirming my dad, who worked in N. tower, wasn’t there. Then down to evacuated WH for updates fr Alan Etter. Chasing rumors. #wherewereyou

I seen alot of smoke but I thought it was heat from an apartment until a para comes in & my teacher turns on the radio. #WhereWereYou

@kimijtoo #wherewereyou I was at work in NYC. The sound and smells will live in me forever.

Up early for school, saw it unfold on TV. That night my brother, F-16 pilot, called up for duty- nightly air patrols over NYC #wherewereyou

For some, though, 140 characters weren’t enough.

I watched the 2nd plane hit. Ran down 30 flights of steps from 40 Wall. To where? Left. To the water. Jump in and swim, if you have to…

…We began to walk uptown, on the FDR. Away. Away from downtown. Away from what we just witnessed. Away from fiery debris…

…And in leaving the scene behind, we put the Towers out of our view. We heard rumblings. But we kept on booking north. Then, at 10:28…

…that’s where it all happened. That’s when we caught a view of it on our way uptown: NOTHING. Just smoke. No buildings. Not there…

…At 9:01 I watched it. That South Twoer fireball? IN MY FACE. Right there, up close. 90 minutes later, there was nothing. No Towers…

…It’s the little things. I bought a Nesquik that morning. I wore really uncomfortable shoes. I *just* got my first cell phone…

…Even without Twitter, the flurry of conversation on the FDR was all wrong. “They hit the White House!” “Empire State bombed!” …

…but mostly it’s the blank expressions. Nobody was sad. Or vengeful. Or even concerned. Nobody had a face to wear. Nobody could process…

…Worse, nobody had any idea where to go. Where’s safety? Which way? How do we get there? And how do I tell my loved ones I’m okay?

In the best 9/11 post-script ever, I went to Game 5 of the 2001 World Series. One of the best moments of my life: pic.twitter.com/nzTY2l9RHW

And scene. Thanks, guys. I feel better.