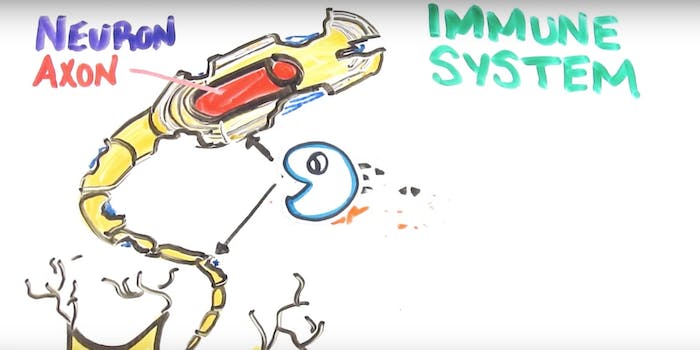 The science and research behind the invisible illness.

Kate Langwine-Cooke’s hands are already shaking before the video starts. Within moments, her full body’s overtaken by the tremor, convulsing so uncontrollably that the camera’s thrown off her legs. The video cuts off after 27 seconds, but the attack would last another 25 minutes.

“These ‘attacks’ are brutal and are completely draining,” Langwine-Cooke notes in the post.

The video is difficult to watch, but it’s a powerful look at the reality of living with multiple sclerosis.

Langwine-Cooke, an assistant soccer coach in North Wales, posted the video to the Facebook group, Invisible Illnesses, to share the “not so invisible side” of her disease. Multiple sclerosis (MS) can sometimes feel like an invisible illness to people who suffer from it because the symptoms come and go, and can be as nonspecific as fatigue. Other times symptoms may be mistaken for clumsiness or forgetfulness, when really they’re the result of a nervous system gone awry.

But MS is a serious, complex illness without a cure. Treatment options only work so well, and there’s nothing that can stop or reverse the disease’s progression. Every individual with MS has a different constellation of symptoms, so there’s no one-size-fits-all treatment for the illness.

What is multiple sclerosis?

Multiple sclerosis occurs when a person’s immune system begins to attack and degrade the fatty insulation called myelin around the cells in their brain and spinal cord. Brain cells—called neurons—need myelin to properly communicate to one another. Without it, the cells are unable to send messages as well and they can ultimately degrade and die.

The disease has strong genetic components and runs in families, but researchers have drawn connections to numerous environmental factors as well. MS is often called a “disease of affluence” because it tends to be more prevalent in developed nations. This may simply be due to better diagnostics in developed nations, but it may also point to some other environmental factors such as diet. In particular, smoking, having Epstein-Barr virus (which causes herpes and mononucleosis), and a lack of vitamin D from sun exposure seem to play a role in the development of the disease, according to the National MS Society. The disease affects more women than men, and typically strikes in a person’s 20s and 30s.

Most people with MS have the relapsing-remitting type, where symptoms that affect everything from their ability to move, speak, and perform simple tasks like getting dressed will come on suddenly, and then vanish. Often times, these relapses take a little piece of that person with them. For example, the relapse may cause them to need a cane to walk around, whereas before the relapse they needed no assistance.

Seizures, like the ones Langwine-Cooke suffers from, are another symptom, but they’re not as common.

Over time, these disabilities accumulate, making it more and more difficult for a person suffering from the disease to carry out everyday activities. Over the course of several years, relapsing-remitting MS can become progressive. The symptoms continue on and just get worse over time. Some people only have progressive MS from the onset.

How do you treat multiple sclerosis?

Right now we don’t have a cure for MS. But there are a few drugs on the market that help prevent relapses, allowing patients to have longer periods of time with few or no symptoms. Often these treatments come in the form of injections.

There are several other treatment options in the works that may one day lead to drugs that stimulate the body to regenerate myelin or rebuild lost connections between neurons, but all that research is in its infancy.

The disease is frustratingly idiosyncratic—it affects everyone differently—so some treatments don’t work very well in some people. Some people turn to specific diets, thinking things like eating more polyunsaturated fatty acids (found in myelin) and avoiding certain foods will help. But those diets don’t often hold up to scientific scrutiny, according to the National MS Foundation.

Individual symptoms require individual treatment. Often a person with MS sees many specialists like neurologists, immunologists, and physical therapists. People with the disease often have to learn and adapt to new disabilities.

But staying positive, active, and maintaining healthy relationships have all been shown to help people with MS manage their symptoms.

Avoiding smoking, staying fit, and making sure you maintain a healthy diet seem to all help prevent MS, though there’s no way to make sure you never get the disease. For friends and family of someone suffering from the disease, showing support and understanding go a long way. The National MS Society also has several avenues for people to get involved in supporting research.

Of course, simply being aware of an illness that is often invisible is the first step.