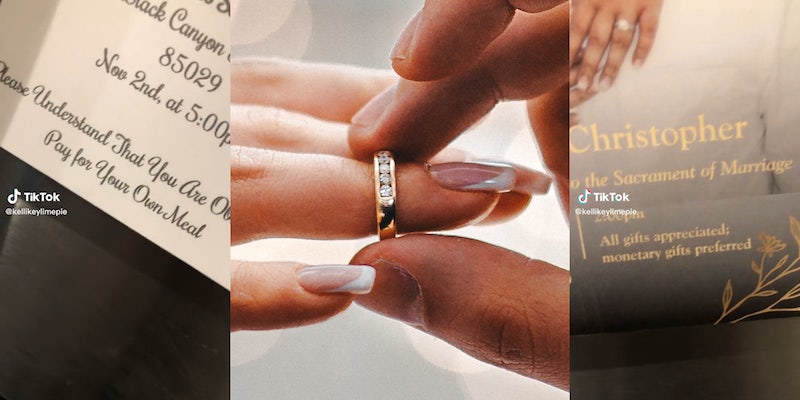 ‘I swear some people get married thinking it’s a fundraiser’: Bride and groom roasted for asking attendees to pay for own meal, give monetary presents

‘Never been to a BYOF wedding.’

A user on TikTok has sparked debate after sharing a wedding invitation to the platform.

In a video with over 661,000 views, TikTok user Kelli (@kellikeylimepie) contrasts a wedding invitation with the couple’s request for gifts.

On the wedding invitation, the guests are told, “please understand that you are obligated to pay for your own meal.”

On another part of the invitation, however, guests are told, “all gifts appreciated; monetary gifts preferred.”

As Kelli says in the caption, “Tell us how you really feel!”

In the comments section, many users said an invite like this would put them off going to the wedding entirely.

“I regret that we are unable to attend,” one user stated.

“I wouldn’t even bother to RSVP,” another offered.

Many commenters were sympathetic about a difficult financial situation; however, they also noted that paying for one’s own meal while being asked for a monetary gift can leave a bad taste in guests’ mouths.

“I would be fine paying for my own meal if the invite said no gifts. But to expect cash when guests are paying for themselves is absolutely ridiculous,” one user commented.

“Wanting money over gifts is fine especially since a lot of people already live together, but paying for your own meal?! LMAO,” a second echoed.

“I swear some people get married thinking it’s a FUNDRAISER,” another wrote.

That said, some users defended the actions of the newlyweds.

“I’m in the minority but idk, I get it,” one user offered. “Weddings are expensive. It’s not like they are asking you to travel to another country or something.”

The Daily Dot reached out to Kelli via Instagram direct message.