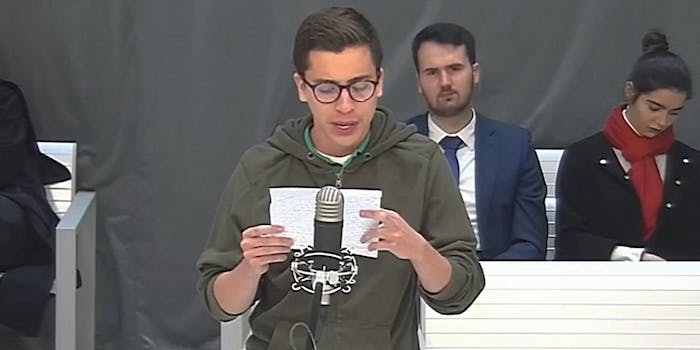 Wealthy man acquitted of rape because he ‘didn’t enjoy it’

A judge in Mexico has acquitted one of three men accused of raping a 17-year-old girl on the grounds that, as one activist described it, he “didn’t enjoy it.”

Diego Cruz, who was 19 at the time, and three of his friends, all sons of wealthy businessmen and politicians, allegedly abducted their former high school classmate and forced her into the back of a car as she was leaving a party in Boca del Rio, Veracruz, in 2015. The girl said Cruz and another man, Jorge Coahuila, grabbed under her shirt and shorts. A third man, Enrique Capitaine, raped her, while the fourth sat there.

Though Judge Anuar González acknowledged that Cruz touched the girl’s breasts and genitals, he found that Cruz’s action was “incidental rubbing” that lacked “carnal intent,” and was therefore not assault.

The decision, as well as the case at large—which has been dubbed “Los Porkys” after the ’80s movie about teen boys’ sexual exploits—has drawn ire from many throughout Mexico for how privileged, affluent men can rise above the law. “He sexually touched her, but because he didn’t enjoy it, it’s not sexual abuse?” activist Estefanía Vela Barba told the Guardian. “There’s no disputing the facts… It’s coming from the judge’s mouth, and he’s saying that if they touch you against your will, it might not be abuse.”

The case first made headlines after the girl’s father released video of the men essentially confessing to the crime. “We made a mistake,” Cruz is heard saying in one of the videos. Cruz later released a statement saying he was innocent.

The girl’s father, Javier Fernández, told the New Yorker last year he made the videos because he knew the Mexican justice system would fail his daughter. Upon Judge González’s decision Monday, he told a local radio reporter, “Imagine, any adult can touch any person, of whatever age, and go free by saying it was not lascivious, and that there was no intent to have sex.”

Capitaine is awaiting a ruling in his case and Coahuila remains at large.