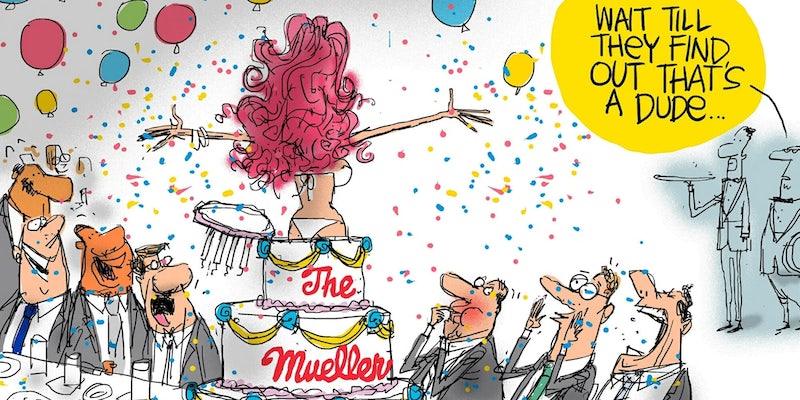 Washington Post under fire for transphobic cartoon about the Mueller Report

Comparing the Mueller report to a trans woman is a bad look.

Last Friday, Special Counsel Robert Mueller handed in his findings to Attorney General William Barr, who claimed the report neither proved President Donald Trump committed a crime nor did it exonerate him. Since Mueller’s due date, political analysts and cartoonists have weighed in on the matter. And some hot takes are better than others.

Case in point, a particularly egregious cartoon on the Washington Post’s website is going viral for disparaging trans women.

Conservative political cartoonist Mike Lester is part of the Washington Post Writers Group, where he runs the syndicated comic strip Mike Du Jour. He also pens editorial cartoons, which are published on the Post’s website. Most, if not all, of these criticize the Democratic Party and the American left. One strip reads “New Zealand Massacre: Alternative Ending” and suggests the Christchurch mosque shooting would have been stopped if its victims were armed. Another targets Rep. Ilhan Omar (D-Minn.) by accusing her of anti-Semitism.

Lester’s latest cartoon goes after trans people. In it, a party of men in suits (seemingly politicians) hoot, howl, and wolf-whistle at a busty woman with an hourglass figure popping out of a cake called “The Mueller Report.” Two male waiters stare at the spectacle in the corner, as if they’re the voices of reason in the scene.

“Wait till they find out that’s a dude,” one quips.

It’s obvious what Lester is implying: The Mueller report is as disappointing and deceptive as trans women who seduce cisgender men. If only we wore our transness on our sleeve, we could protect cis people from ever having sex with us. It’s not just bigoted; its punchline is so transphobic that the comic only makes sense to readers who also think trans women are secretly men in drag.

I dont even know what the "joke" is supposed to be

In transmisogynist logic if a hot chick is trans than she's a disappointment or a betrayal. So basically the joke is supposed to be that the Mueller report was this big attractive thing which turned out to be at best disappointing and at worst an active betrayal.

For the record, this isn’t the first time that Lester took aim at transgender women. In a cartoon from March 4, he penned a strip where a buff, masculine runner labeled “trans” outpaces two cis women. One of the two says, “I identify as a girl who just wants to compete with girls.” The other replies “me too.”

It didn’t take long for trans Twitter to call out Lester and the Post, pointing out the artist’s transphobia.

THere's not even a joke!

For the record, Trump fans loved Lester’s cartoon. It’s not like transphobia and Trump worship tend to walk hand-in-hand or anything.

At the very least, it seems some staff members at the Post are aware of the comic’s problems. After Lester’s strip reached Reddit’s r/transgender, the Post’s embedded audience editor Gene Park thanked users for “sounding off on this offensive piece.” He also stressed that Lester is not an employee with the Post, and that the publication “[does] NOT run Mike Lester’s cartoons” in the paper.

“I wish I could say more but to be as transparent as I can, I’m a social media editor who runs our Reddit community,” Park wrote. “I’m not at all acquainted with how the syndication side of the business operates. It’s outside the editorial operation, and despite having worked all my life in newspapers I’m not familiar with how accountability works when it comes to syndicated folks, and in the meantime, I hoped to give you all a better plan of action. I’m trying to navigate what to do and I intend to speak up. Thanks all for your patience in light of this.”

Meanwhile, the Washington Post is also facing criticism for misgendering Albert Cashier, an Irish-American Union soldier during the Civil War, on Monday. While Cashier lived as a man before, during, and after the war, the Post included Cashier on a series “sharing the stories of women who made amazing contributions to their countries during wartime.” In particular, the Post stressed he was “born a woman” and “would likely be considered transgender today.”

His inclusion, of course, is entirely inappropriate given that he did not identify as a woman. It’s just another sign that the Post has some work to do on trans rights.

Update 9:06pm CT, March 26: The Washington Post’s director of communications, Shani George, responded to both controversies in an email to the Daily Dot. George confirmed Mike Lester’s cartoon was syndicated by the Washington Post Writers Group and did not run in the Post.

“We give cartoonists wide latitude in what they present,” George said. “While we may not agree with some perspectives, cartoons serve a role in generating conversation and debate.”

George said that in response to criticism over the inclusion of Civil War veteran Albert Cashier in a series on women, the Post issued the following correction:

We incorrectly included a story about Civil War veteran Albert Cashier in a podcast series about women who won wars. Cashier, whose birth name was Jennie Hodgers, enlisted in the Illinois Infantry as a man when he was 18. His inclusion in the series was not in keeping with Washington Post style which states that people should be referred to by their current identity. We have since removed the episode from the series and made some corrections to pronoun usage within the episode and online to adhere to Post style.