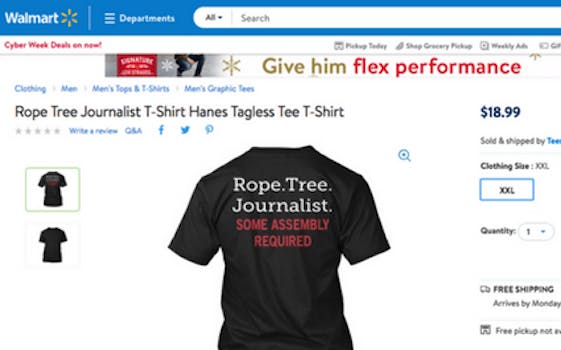 The shirt was removed from the site within a day.

Walmart has pulled a T-shirt with the words “Rope. Tree. Journalists. SOME ASSEMBLY REQUIRED” from its online site after being flagged as offensive by the Radio Television Digital News Association.

The third-party company responsible for the design, Teespring, allows customers to create their own designs to either buy or sell. After this shirt, in particular, landed on the Walmart’s website, the journalism advocacy group flagged the item and wrote a letter to Walmart.com.

“It is our belief that at the least, T-Shirts or any other items bearing such words simply inflame the passions of those who either don’t like, or don’t understand, the news media. At worst, they openly encourage violence targeting journalists,” the letter stated.

A senior specialist for Walmart replied within five hours, stating he forwarded the letter to the appropriate team for removal.

“This item was sold by a third-party seller on our marketplace and clearly violates our policy,” Walmart said. “We removed it as soon as it was brought to our attention, and are conducting a thorough review of the seller’s assortment.”

Teespring has also confirmed the T-shirt has been pulled and says it is working to prevent further designs like this from slipping through their filters.

This isn’t the first time this T-shirt design has been critiqued by the public. A Reuters photographer snapped a picture of a President Donald Trump supporter sporting the shirt at a rally days before the 2016 election.

Again, our photographer took this in Minnesota. I had the location wrong the first time. Apologies. pic.twitter.com/OwuCt7WAUr

With the nation’s largest retailer now looped into the controversial mix, journalists, commentators, and politicians have voiced their outrage, questioning the ethics of the Walmart brand.

Yo, @Walmart, the hell did my profession ever do to you that you felt ethically fine profiting off of this steaming pile?

Sorry, forgot. Walmart and ethics. Not a thing. https://t.co/hXHDqlhDzJ

I saw Trump supporters wearing "Rope. Tree. Journalist. Some assembly required" shirts when I was on the campaign trail last year. Unbelievable that Walmart has been selling them. https://t.co/ahYaiF93UH