'If we had a real life purge, I would kill as many Mexicans as I could in one night.'

You’d think by now, after countless baristas and waiters have been dragged online for writing offensive things about their customers, people would learn to at least keep their racist and sexist thoughts to themselves. And yet, here we go again.

Megan Olson, a Colorado waitress at the chain Texas Roadhouse, was fired after tweeting, “If we had a real life purge I would kill as many Mexicans as I could in one night.” The tweet was reportedly in reaction to a party that didn’t leave a tip, which is frustrating, but you know, not grounds for blaming the behavior on an entire nationality.

Needless to say, people are angry.

Maybe that chick was just a horrible waitress who didn't deserve a good tip! I always tip 20%, #megancjolson

WOW YOU CANT SAY THAT #MeganCjOlson

Texas Roadhouse appeared to have learned of the event after someone posted a screenshot of Olson’s tweet on its Facebook page. Two hours later, Texas Roadhouse responded, “Thank you for contacting us. This employee has been terminated as discrimination of any sort is not tolerated at Texas Roadhouse.” 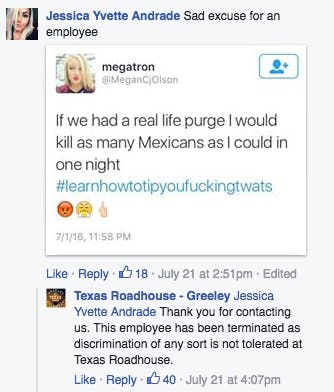 Later, Olson apologized on her personal Facebook page, and also wrote on Texas Roadhouse’s page, “I just want to apologize for my racial comments. I don’t have anything against Mexicans. I think they are great people.” In a second post, she also asks, “If there are any other restaurants that are hiring please let me know.”