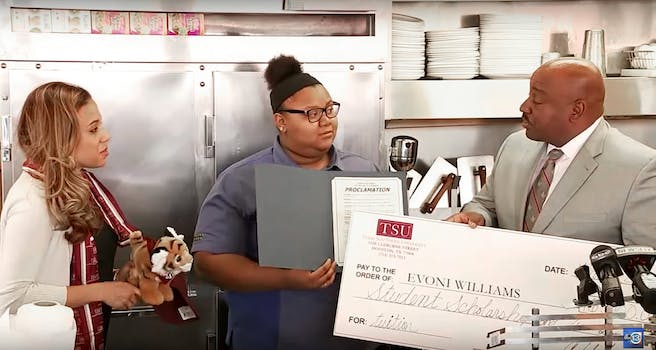 Texas Southern University awarded her a $16,000 scholarship because of her act of kindness.

Hope you have some tissues handy.

One Texan teen felt the power of gratitude on Thursday after a stranger posted a photo of her cut a meal into smaller bites for a 78-year-old man at the Waffle House during her shift as a server.

Evoni Williams works full-time in a La Marque, Texas Waffle House to save money for college. During one of her shifts last weekend, diner Laura Wolf caught a snapshot of Williams helping a disabled man eat his dinner and posted the photo on Facebook.

“I don’t know her name but I heard this elderly man tell her his hands don’t work too good. He was also on oxygen and struggling to breathe,” Wolf wrote. “Without hesitation, she took his plate and began cutting up his ham. This may seem small but to him, I’m sure it was huge. I’m thankful to have seen this act of kindness and caring at the start of my day while everything in this world seems so negative. If we could all be like this waitress & take time to offer a helping hand.”

Wolf’s post went viral and received thousands of likes and comments that praised Williams for her act of kindness.

The post even attracted the attention of La Marque city officials and scouts from Texas Southern University—who decided to offer Williams a helping hand.

The city mayor proclaimed March 8 to be Evoni “Nini” Williams Day. At the press conference held to make the announcement, Texas Southern University surprised the 18-year-old with a $16,000 scholarship to the university. The local ABC affiliate in Houston captured the emotional moment on camera.

While she’s grateful for the life-changing gift she received, Williams said what she did for the man was nothing special.

“It’s something I would do any other day,” Williams said.